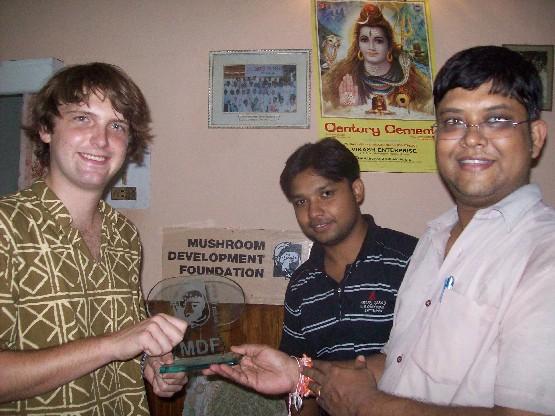 My name is Gareth Knott and I would like to inform you about my experiences during the three weeks that I spent with MDF.

I am 22 years old and currently I study Mathematics at the University Of Bath, England. I have taken a year out of my studies and during this time I worked for 8 months for an insurance company in England before embarking on a round the world trip. In the previous 6 months I have been fortunate enough to visit the United States of America, Australia, Vietnam, Cambodia, Thailand, China, Singapore and India.

I became interested in MDF after I came across the organization on the internet. Following a correspondence between Pranjal Buruah and I, I gladly took the opportunity to come to Assam to see all the beneficial work being carried out by MDF. Subsequent to my work with a university organization ‘One World’, which raises awareness on a range of international social issues including fighting AIDs, fair-trade and the alleviation of poverty, I was keen to understand how an NGO in India operates.

I chose MDF in particular because it offered a very strong economic model built on top of a strong ethical foundation. MDF seeks to create a federation that brings farmers together in a way that allows them to actively participate in the market economy. The federation empowers the farmer so that they will be consulted in and contribute to related government decisions such as agricultural planning and policy. MDF has started to construct a resource centre that will help the community on a wide range of issues including health and sanitization, education, consumer protection laws and other income sources. Moreover MDF’s model will become an example of self-sustaining rural prosperity.

I was impressed to hear about its innovative approach to creating a new market system. The model works in a way that will create a measurable social impact. By 2015 MDF will be able to increase the income of 20,000 small farmers from Rs. 500 to Rs. 4000 as well as raise the income of a further 5,000 poor urban workers. The model is enterprising so that hard work is rewarded and that the project can operate in a fully self-sustaining manner. A huge advantage of the MDF economic model is its easy replicability to many other regions in the world - in the near future to regions such as Bhutan, Nepal and Bangladesh.

Whilst the rest of India is booming, Assam which possesses the lowest per capita GDP growth in India, is being left behind. In Assam 64% of the population depend on farming for their income but agriculture only accounts for less than 4% of the states GDP. The farmers in Assam work hand to mouth earning little or no real income. Farmers face the problem of either being exploited by unscrupulous businesses or being entirely blocked from certain markets in which cartels have formed. The farmers’ difficulties are further compounded by the progressive shrinking of their land holdings.

Mushroom production provides a low cost solution to many of these problems. The mushroom market is still in its infancy and thus lacks the cartels present in other industries. Further mushroom production is not land intensive.
During my time in Assam I was able to see first hand how MDF makes a tangible benefit to the lives of small farmers. I have learned a great deal whilst being here and am very grateful to MDF for everything they have shown me. I would further like to extend my gratitude to the people of Assam for their persistent friendliness and goodwill.

One my return to England I plan to continue my support for MDF. I have started to develop a website for MDF and will complete this on my return. I will further investigate fund raising opportunities in England as well as potential market linkages.

I hope to be able to return to Assam soon.

If you would like to known more or talk to me directly I will be contactable on 9954653016 until August 16th. Otherwise you may email me at gareth.knott@hotmail.co.uk

Pranjal Baruah, the general secretary of MDF, is contactable on 9854003003 or alternatively you can email him at mdfassam@hotmail.com

23 Mar 2018 - 9:55pm | Mithun Baruah
MARGHERITA: Hundreds of people hit the streets in Margherita on Friday outlining a slew of demands which they want to be fulfilled at an earlier date. Organized by AJYCP’s Margherita unit, the...

30 Mar 2008 - 3:33pm | editor
A two hour long powerful storm on Saturday midnight has left lakhs of houses ravaged in central and upper Assam district. According to information, a women died in Roha in Nagaon district when her...