Ramon Magsaysay Award winner Dr Sandeep Pandey has termed the human rights violation in Northeast and Jammu and Kashmir as ‘worst’. Attending the Meet the Press programme at the Guwahati Press Club today, Dr Pandey said: “The human rights violation in North East and Jammu & Kashmir is worst in the country. These areas have suffered a lot from time immemorial and people of these areas are facing an identity issues.” Dr Pandey was in Guwahati on way to Imphal, the capital of Manipur, to take part at a three-day solidarity fast to support Irom Sharmila’s campaign against the Armed Forces Special Powers Act (AFSPA) in Manipur, Hailing Sharmila for her ‘peaceful protest,’ Dr Pandey said: “We are here to salute here. For the last seven years, she has been fasting in protest against the Draconian law. She has not created any problem for others. This peaceful protest by a woman is really remarkable.”Stating that the Government of India is biased against the northeast and J&K, he said: “It is not only the Northeast region but the human rights violations are going on in almost every place of India. Uttar Pradesh has the highest number of encounter killings in the country, but there is no Draconian law like the AFSPA there.”When asked about the armed conflict in Northeast, he said: “It is up to the people of the region to find out an amicable solution. What the local people want, should be respected. The Government will felicitate talks. I think dialogue is the only way to solve the insurgency. Militarisation will never solve the issue.”Coming down heavily against the uranium mining in Meghalaya, Dr Pandey said: “Uranium is radio active and create health hazards. Till now world has not find out any solution to the radio-active effects. At a time when many countries have given up the nuclear programmes, it is really shocking to see the Indian Government is planning uranium mining in Meghalaya.” 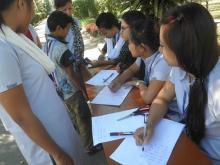 3 Mar 2017 - 8:53pm | AT News
A group of dreaded ULFA-I rebels is believed have been hiding in the city of Guwahati forcing police to remain alert these days. According to confidential inputs, these rebels who have managed to...

12 Mar 2014 - 2:18pm | AT News
We have nothing to hide. We will publish white paper on the assistance to the state by both UPA and NDA  governments. This was what chief minister Tarun Gogoi told reporters on Wednesday....