A major protest is waiting to erupt in Arunachal Pradesh as the Centre on Wednesday confirmed the process to grant citizenship to Chakma and Hajong refugees.
A highlevel meeting of Union home minister Rajnath Singh with Arunachal Pradesh Chief Minister Pema Khandu, Union minister of state for home Kiren Rijiju and National Security Advisor Ajit Doval finalized the move in the light of the Supreme Court order in 2015 directing the Centre to grant citizenship to the Chakma and Hajong refugees.
According to home ministry officials, the Centre needs to implement the Supreme Court order in 2015 for citizenship for the Chakmas and Hajongs which triggered huge protest in the north eastern state.
Sources say the even after granting them citizenship, the Centre will legislate laws that would disallow the Chakmas and Hajongs to own the rights and ownership of land.
Chakmas and Hajongs who were originally from Chittagong Hill Tracts in Bangladesh left their homeland after the Kaptai dam project ravaged their homes in the 1960s.

12 Aug 2016 - 9:59pm | AT Kokrajhar Bureau
Kokrajhar is all set to celebrate 70th Independence Day on Monday with befitting programme scheduled at Govt HS & MP school ground in Kokrajhar,for which students from different school and police...

27 May 2020 - 10:37am | Shajid Khan
UDALGURI: Chirang Police suspended a sub inspector rank police officer serving as Officer-in-Charge of Amguri PS in Chirang district after he allegedly assaulted a doctor and two of his... 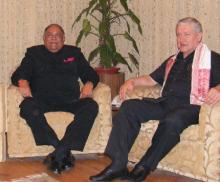