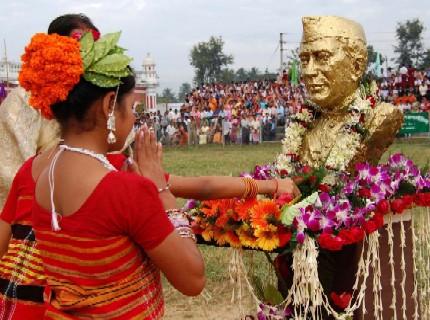 We gather once again on 20th November this year to commemorate globally the 'Convention on the Rights of the Child' which was signed by the United Nations on this day in 1989 and sanctioned by several countries to provide basic rights to the children. In India Children's Day is celebrated on 14th November, the birth anniversary of Jawahar Lal Nehru, the first prime minister of free India and a great lover of children and roses alike.

The sole purpose of setting aside this day was to promote the children's welfare and to protect them from harm . And yet millions of children worldwide work under slave like conditions ,searching for a childhood which does not exist for them. India is discredited with having the largest number of working children in the world ( anywhere between 60 to 115 million) who start working from the age of 5 years due to economic reasons. More than half of them will never be literate. Most of them will be irrevocably sick by the time they become adults, likely to be dead by 50.

A child's mind was once thought to be a mind of pristine innocence ,free of rigid ideas. Alas it is no longer now. Neither for those whose childhood is mortgaged for a few rupees, nor for the privileged few who mature even before their 'age of innocence' arrives. The city kids ( all over the world), as young as 3 years old, have very definite views about what they want or not want, be it food, clothes, toys or even household gadgets. By the time they are 6 or 7 they make their parents proud (??) with their deft handling of mobile phones, internet games and TV sets. More than 50% of 3 year olds in UK have a personal TV set in their bedrooms and those in the age group 11- 15 years spend almost 53 hours a week in front of the computer/ TV screen.

Thus with eyes glued to the flickering screen images, ears tuned to the i-pod and hands holding a pack of chips/ coke / burger, today's urban child seems to be the very antithesis of a healthy and carefree existence. An alarmingly increasing number of teenagers are becoming emotionally hostile and attention deficit due to their addiction to online games, pornography, cyber sex and chats. So much so that China's health authorities have placed Internet Addiction on par with alcohol/drug abuse and gambling as it is responsible for most juvenile crimes. The situation is so grave that Internet De-addiction Centres are being opened in many South Asian countries like China and Thailand as internet use( rather abuse) explodes. Recently IIT,Mumbai,( a world class premier engineering institute of India) restricted internet access in its hostels saying that addiction to surfing/ gaming/blogging was making students reclusive and even suicidal and was replacing the old hostel culture of camaraderie with depressive and dysfunctional lifestyles.

From petty thefts to rape, abduction and murder JUVENILE CRIME has entered a deadly new phase in India, mostly in the upper strata of society. In October 2007, 3 Ahmedabad teenagers killed their 6 year old neighbour to raise 25 lakh rupees in ransom to lead a life of luxury. In August 2007,a Mumbai teenager was killed by 4 friends who demanded Rs.2crore ransom from his parents. A 14 year old girl helped a woman to hack her mother in law in return for a new mobile phone. A teenager ,near Sonepat, molested a girl and shot dead her brother when he protested.

Our kids are indeed living in violent times--violence in movies, within families, on the roads. The 'Age of Innocence' is over. It has been overpowered with the lust for easy money and substance abuse. Even those few, who are brilliant achievers in various fields, cite money and power as their main aim in life.

The exuberance of childhood has been replaced with an uncouth brashness. Niceties of manners and finesse of language have become obsolete. Instead ,we have the crass I, ME and MYSELF attitude. 'Shit and 'Bastard' have become the most often used words in kids' conversations.

And all this because primarily we as parents, elders, teachers have failed miserably in our duties and responsibilities. Changing lifestyles, crumbling joint families and a market driven society has left our children rudderless and valueless. Instead of giving them quality time and selfless love we are smothering them with material goods.

With education perceived as the only means of advancement in the ultra competitive society (especially in Asian countries), parents expectations are unrealistically high. American psychologist Madeline Levine has identified a growing breed of 'helicopter parents', so called because they hover over all aspects of their children's lives. They push them so hard to excel at everything, from Maths to English to sports and music, that they end up as hopeless failures. The struggle to please over ambitious parents leads to violent and immoral behaviour and feelings of self hatred. ( I come across many such parents of my pupils. Sadly, even when I point out their fallacy they refuse to listen saying they are doing it for the good of their child).

With both parents working long hours, preparing balanced meals at home becomes difficult. So salty snacks and fizzy drinks have become the main meal of cranky, pampered kids. This is fomenting a health crisis in Japan, the home of sushi, seaweed and world's longest life expectancy. The U.S. food chains are helping it to rear a generation of young sugar addicts spending their adolescence fighting obesity and acne. India unwittingly boasts of being the largest snack market in the Asia Pacific region. Emotional stress is linked with junk food faddism. Only if could make our kids skip the fries and go hard on soft drinks. Housewives could take this as a business opportunity to supply tasty wholesome homemade food to working parents and school canteens.

Only if we would not treat our kids as our prized possessions whose achievements alone are to be showcased as trophies. They need our love and assurance the most when they deserve it the least. Let them know that failures are as much part of growing up as success. Let us consciously try to remove the imbalance of power ( still prevalent in most Indian homes) which makes the sons believe that they can get away with everything. Let us give them a sense of belonging and not expensive gifts. Let us respect the law and not indulge in a sick display of opulence.

We may have our own dreams about our children but as they grow older we need to respect their interests and choices in life and not stifle their growth as still happens so often in Indian homes which sometimes even results in the so called 'honour killings' of adult sons and daughters who choose to marry of their own accord outside their caste and/or social status.

Let our children grow to be a trifle more sensitive about the needs of the millions of those underprivileged Indian children who are working under miserable conditions in stone quarries, in the carpet industry, as domestic help, as ragpickers or in the sex market, with no access to schools and two square meals a day.

On this Children's Day let us try to gift our children their 'Age of Innocence' and a 'safe childhood' sans junk food, TV/internet abuse, conspicuous consumption, sedentary lifestyle and an insensitive couldn't-care-less attitude. Let us guide them lovingly yet firmly on their path of self discovery.

(Shobha Shukla teaches Physics in India's noted Loreto Convent, and writes on human interest issues in Asian media. She can be contacted at: [email protected] )

Politics is a ‘chronic disease’ that haunts a politician life long

10 Oct 2016 - 11:39am | Daya Nath Singh
It is an established fact that a person involved in political activities cannot remain in peace till his cherished dreams are fulfilled. This can be noticed through the recent statements of former...