The banned ULFA has claimed that two of its leaders were picked up by Indian intelligence agencies in Bangladesh.In an e-mail to Assamtimes, signed by ULFA publicity secretary Arunudoy Dohotia, the outfit said 'captain' Antu Saudang and 'second lieutenant' Pradeep Chetia were picked up on December 13 and their whereabouts were not known since then.

The e-mail, signed by ULFA publicity secretary Arunudoy Dohotia, however, denied reports that Saudang’s wife was also detained by the security agencies in the neighbouring country. Saudang is the third top leader to be on the run after 'c-in-c' Paresh Barua and another commander of the armed wing Jibon Moran 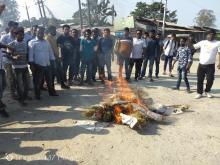