One person died, several others have been injured when a severe storm lashes parts of Dibrugarh district on Sunday. The storm lashed the upper Assam district on Sunday night and it took a grim turn in Lahowal area where one Prasanna Das, a resident of Charaihaabi village died after his house collpased. The worst affected areas include Bogibeel, Gardorohia where at least 50 houses have been ravaged.

31 Aug 2010 - 2:48am | editor
The flood fury in Pobitora Wildlife Sanctuary remains critical with almost 95 per cent of the sanctuary under flood waters. The water of the Brahmaputra, Kopili and Kolong had inundated vast tracts... 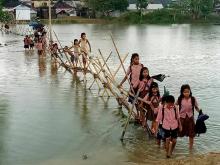 Humanitarian Response to the Flood Ravaged Communities of Assam by NEADS

5 Oct 2017 - 5:20pm | Narayan Gowalla
We have been living in this Nikori gaon since many decades. Every year we face flood like conditions as our village is surrounded geographically by the three rivers system of Brahmaputra, Gelabil and...