Bhumidhar Barman was born in 1931, passed his matriculation from Tihu High School in 1951 and his batch was the last batch to pass from Calcutta University. At present Dr Barman, is the most aged Minister in the cabinet who was also the CM for some time after Hiteshwar saikia,s death. Besides he was alo acting CM at the time when Tarun Gogoi was in Mumbai hospital for a heart surgery. When asked how does it feel to be a seasonal Chief Minister, the octagenerian very humbly said that he is not at all bodered about what is in his hand. In the last election too Dr. barman was in news as far as CM candidature was concerened. Even at the age of 80, he is all set to carry his political career forward.

21 Dec 2014 - 9:49pm | AT News
Kokrajhar district administration conducted a cleanliness drive on Sunday to keep the environment clean and clear. Deputy Commissioner Thaneswar Malakar participated in the drive in front of the...

17 Aug 2016 - 1:01pm | AT News
ULFA-I was believed to have deployed some students to carry out armed attack in Tinsukia district to disrupt the Independence Day celebrations. The startling revelations have surfaced when policemen... 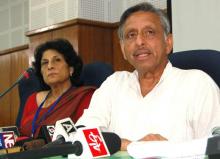