1 Dec 2014 - 11:33am | editor
The Assam Government will confer Sukapha award to noted lawyer KN Saikia on Tuesday. The former Supreme Court judge will receive the award from chief minister Tarun Gogoi at a function at Rabindra...

11 Jul 2009 - 8:40am | bishwajeetsinha
Most of the roads connecting Nagaon with Jagi Road, Dimapur, Tezpur are in such a dire state that travelling through these are becoming to be real nightmare for citizens. The condition of NH, SH as... 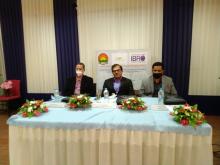 26 Oct 2021 - 8:15am | AT News Shillong
Shillong: The Department of Biomedical Engineering, in collaboration with the Department of Education, North Eastern Hill University, Shillong is organising an International Brain Research...