Assam Chief Minister Tarun Gogoi and his Nagaland counterpart Neiphu Rio have ordered probe into the recent lathicharge in Golaghat by Nagaland armed forces. An apex Naga students body has also expressed grave concern over the action of Nagaland police personnel on demonstrators of All Assam Students Union in Golaghat district of the neighbouring state.

Condemning the police lathicharge Naga Students Federation has asserted that such attitude towards the peaceful demonstrators was totally an act of disrespect.

A statement issued by NSF said, the federation, therefore, invokes the conscious of the authority concerned and the police personnel to restrain from such unwanted situation especially towards our neighbouring state in order to avoid creating any misunderstanding as we are living in peaceful co-existence"

Extending its solidarity to the injured protesters and support towards the demand of the AASU, the NSF also urged upon the Nagaland government to seriously examine the incident and take up necessary action. Twenty five people, mostly, students were injured, some of them seriously, when IRB personnel of Nagaland police passing through Golaghat district unleashed baton charge on demonstrators who blocked the NH-39 on near Rangajan Tinali.

12 Feb 2017 - 9:19pm | AT Kokrajhar Bureau
The golden jubilee celebration of the All Bodo Students Union (ABSU) begins today with four day colorful programmes at Jangkritai Pwthar in Kokrajhar.  The celebration is looking colorful with... 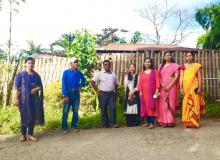 24 Aug 2017 - 3:23pm | Mowsam Hazarika
The meeting of Public Accounts Committee ( PAC) of Assam Legislative Assembly took place under the Chairmanship of  Rajdeep Guala, MLA with the Department of  Agriculture, Dima Hasao on...

6 Oct 2008 - 10:00pm | editor
There is report of fresh clashes in five riot hit districts of lower Assam on Monday where other tribes joining the Bodos in the attack against the suspected Bangladeshi immigrants. All these have...