As the D-Day comes closer, the city of Guwahati prepares itself for the day with round the clock checks, security set-ups and other arrangements. In the spate of the recent bomb blast in Fancy bazar last week, various checkpoints have been set up in different parts of the city to vigilate coming in and around the city.

The venue where Indepence Day is to be celebrated, the Latasil field, have been kept on tight vigil since this month beginning. Policemen have been deployed in and around the field and it has been lit up with lights for better vigil., The policemen keep a 24 hour vigil and conduct checks.

Permalink Submitted by HimadreeBuragoh... on Thu, 29/07/2010 - 18:15
Celebration of Independence day has become a matter of fears and woes. Unlike the past 25 years when we used to celebrate the D day without any turmoils, celebration of Independence day has become elusive for the young kids who are really unfortunate as fear exists in the minds of the guardians who resist the budding ones to come out and enjoy merry-making without any violence and atrocities by the so-called terrorist groups. Anyway, its good that we should be bold to come out and celebrate the most historic day although with adequate security help. 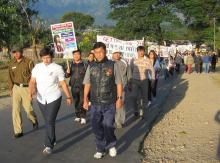 2 Dec 2012 - 4:09am | editor
To accelerate efforts and fight against the deadly disease HIV/AIDS, the World Aids Day was observed at Pasighat General Hospital. To mark the event, the doctors along with staffs, health...