Extortion of public money by thousands of known or unknown organizations has posed serious threat to all development and welfare activities of the people of Udalguri and other districts of Assam. So said S.S.Meenakshi Sundaram,IAS,DC Udalguri at the celebration ceremony of successful completion of four years of Assam government organized centrally at Bishnu Rabha Bhawan, by the Bhergaon Sub-Division administration on June 6. Addressing the mammoth gathering of nearly thousand people,the DC,who also presided over the ceremony,said that huge amounts of money had regularly been coming from the government for the developmental and welfare activities. But most of the schemes had been seriously affected by the forceful collection of money by thousands of so called social organizations. He expressed his regret that majority of the people of the society had never been serious of such anti social activities causing untold harm to people. He requested people to phone or SMS him on any such activities. Earlier Debajyoti Dutta, ADC i/c Bhergaon Sub-Division and DN Hazarika,Circle Officer, Harisinga Revenue Circle welcomed all the guests with a 'Arnaai' each.

Rihan Daimari, Minister PHE, Assam, as the chief guest of the day explained about the various projects and schemes of the government. He said that just four years back Udalguri district had been recognized as one of the most backward districts of Assam; but situation had changed. He said Con-BPF government had offered people most stable government for last nine years. Peace had returned to the state with the improvement of law and order. Daimari declared that leadership quality of Tarun Gogoi and Hagrama Mahilari had been unmatched.The minister announced that additional package of Rs.250 crore would soon be available for Udalguri district and an engineering college would be established at Bhergaon next year. The meeting was also addressed by Kamali Basumatari, MLA, Paneri; Lwmsrao Daimari, EM, BTC; Maheswar Baro, MLA, Kalaigaon. Other distinguished guests present on the occasion were- Mitha Ram Basumatari, EM, BTC; Santias Kunjur, EM, BTC; Rati Ram Boro, MLA; Jagadish Sarkar, MCLA; P.K.Mahanta and Mihir Kumar Barua, both ADC of Udalguri. Various kinds of materials and cheque amounts were distributed among the beneficiaries spot by Minister and Deputy Commissioner. More than 2000 valuable local tree saplings were also distributed among the people present by forest department. 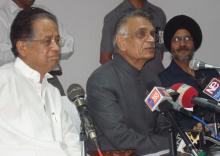 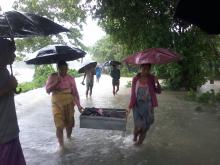