There is feline terror inside the Assam State Zoo in Guwahati when three panthers managed to came out of the iron cages in the morning. Of them has already been tranquilized while efforts are on to trace the second one which is believed to have sneaked into the botanical garden. According to the zoo authorities, a tigress and and her cub came out of the iron cage and were remaining untracked for the last several hours. On seeing of them being caught at a drain, one of them was tranquilized. This has forced the zoo authorities to evacuate the visitors in the morning. The visitors are still remaining outside the zoo premises. Details are awaited.

23 Jun 2012 - 11:10am | editor
AGP comes in support of PA Sangma in the country’s presidential polls slated for July 19. The regional party took the decision when it held its newly formed executive panel meeting at the... 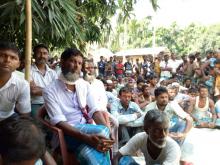