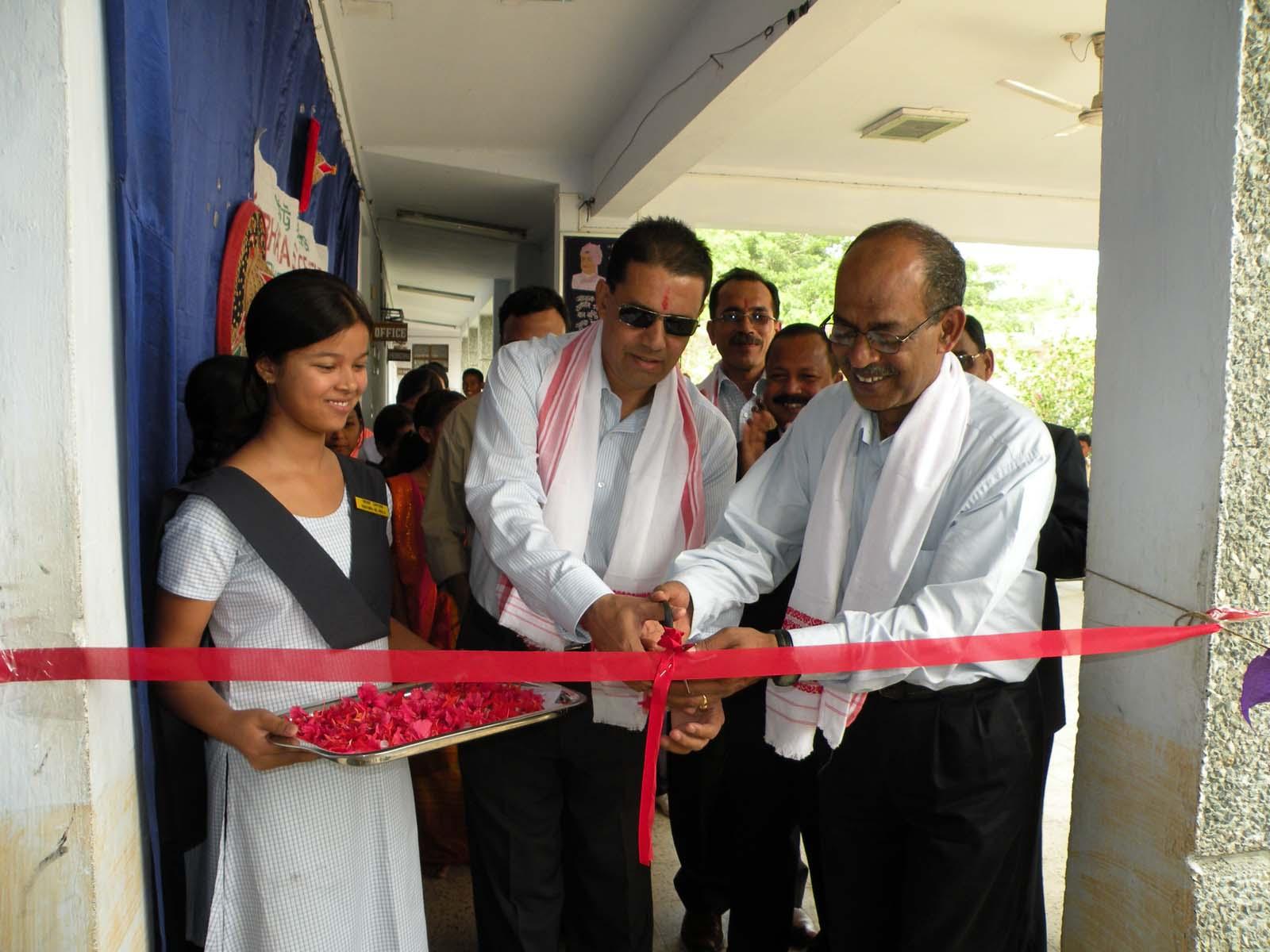 Aryabhatta Science Centre, Kalaigaon under ASTEC Guwahati has organized a day long science programme at JNV (Jawahar Novodaya Vidyalaya ) Kalaigaon on November 11 for the students of schools under Kalaigaon Development Block. Science based competitions like model making, extempore speech and poster drawing were organized on the occasion of National Education day 2009.Hoisting of Aryabhatta Science Centre by noted scientist of Assam and Head of Science & Technology division of ASTEC Guwahati Dr. Ranjit Kumar Barman marked the beginning of the days programme at 9 am. The inaugural ceremony was held at 11 am, where several dignitaries including Dhruba Hazarika,DC,Darrang; Dr.Ranjit Kumar Barman of ASTEC; Dr.Anupam Sarma,Coordinator and Hiten Baishya executive of WWF North Bank Landscape Programme ,Assam; Anupjyoti Deka, Project scientist of ASTEC and senior journalist Bhargab Kumar Das were felicitated with gamocha and flower bouquets. Madhab Sarma, principal, JNV Kalaigaon and working president of ASC and Jayanta Kumar Das, coordinator, ASC, Kalaigaon in their welcome and introductory speeches welcomed the guests and participants and briefed the programmes undertaken by ASC, Kalaigaon under the guidance ASTEC, Guwahati.

Dr.Anupam Sarma of WWF addressed the students on the occasion and said that it was time to think logically so as to remove blind believes and superstitions from the mind os people According to him scientific thinking could alone save nature and ecology.He said the process of changing idealogy had already begun in the world to protect and conserve nature and wildlife. Dhruba Hazarika,DC,Darrang formally inaugurated the science based model. poster drawing and extempore speech competitions at 11 am. On the occasion he appealed the students to raise questions in mind so as to find answers to unexplained mysteries of nature themselves. He also talked to all the student participants A total of 19 science models had been presented by the students on the occasion. Students gave him loud hands when he had announced that Darrang district administration would arrange a scientific tour to Orang National Park for the winners of the competition.

The open session and prize distribution ceremony was presided over by retired science teacher Amiya Kumar Nath,vice president of Assam Science Society,Kalaigaon. Dr. Ranjit Kumar Barman of ASTEC Guwahati in his speech as the guest of honour inspired all the students by narrating difficult science related matters in story telling style ;Dr.Buddhin Hazarika,( Dept. of Zoology);Kamala Bora ( Dept. of chemistry )and Hariman Deka, (Dept. of Geography ) of Mangaldai college also spoke a few words on the occasion as the invited guests. Several outstanding cultural items were also performed by the students of JNV to the delight of all.

16 May 2014 - 8:11pm | Hantigiri Narzary
Two persons were killed and ten others sustain injury in police firing at Panabari under Bijni police station in Chirang district just after declaration of election result for Kokrajhar...