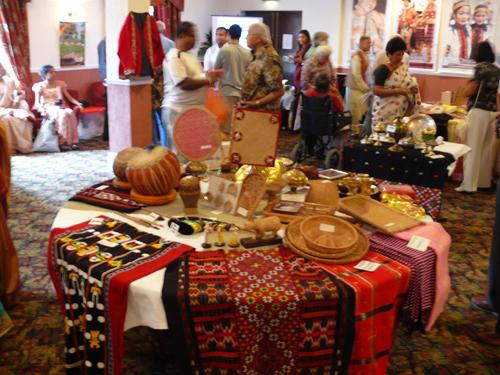 The South Yorkshire town of Barnsley in England came alive once again with the influx of Non Resident Assamese from all over the United Kingdom and Southern Ireland at the weekend of 29th and 30th August 2009. Once again, Mr Francis Hindley, General Manager of the Brooklands Hotel and his staff extended their unquestioning services to over a hundred delegates of all ages under the aegis of the United Assam Association of the UK.

The event took off with a leisurely but disciplined registration assisted by Mrs Julie Bora, newly elected Treasurer, Miss Julie Sarmah and Mrs Chinu Kishore, both newly selected members of the Executive Committee. Dr Ranjit K Baruah, the newly elected President of the Association welcomed the delegates and included items such as procedure to amend the constitution, keeping costs under control so that the event remains accessible to all and offered delegates from Scotland, Northern and Southern Ireland to consider hosting the Assam Day in those parts of the region and not make the hosting exclusively by England and Wales only in his welcome address. The delegates stood in silence for one minute in the beginning to pay homage and pray for the soul of the ones who have departed since the last Assam Day.

Miss Leena Sharma, the appointed Master of Ceremonies for the day took over and introduced individual artists in the cultural programme that followed. Rupali Baruah and Chinu Kishore entertained all through dances, Dr Kumud Sharma in his usual indomitable manner enthralled the audience with his songs, Mrs Sobida Haque sang Zikirs and Miss Rima Kakati entertained with her Bollywood dance number. Mrs Pranaame Bhagawati and Mr Jayanta Bhagawati, the husband and wife dance duo and the invited artists from Assam mesmerized the audience with their skills and talents and their own creation of contemporary themes based on traditional classical principles. The formal part of the evening concluded with the screening of the new, as yet unreleased Assamese film “ Jibonor Bator Logori”

There followed a delicious meal prepared and cooked by Dr Rama Bhartia, MBE and his wife Sashi. As usual, people let their hair down by either attending the “Majlish” or the Disco till late at night.

Events on Sunday took different form from the past. It started with a session on Yoga as therapy by Ms Lina Mookerji, a Yoga therapist from Nottingham and simultaneous hosting of an exhibition of traditional arts, crafts, books, clothes etc from the North East of India under the able stewardship of Mrs Manju Barkataki. Mrs Rupali Baruah, Drs Jayanta Biswa Sarmah and Larry Khongiwr added greatly to the occasion while a parallel session of “Assam Olympics” was compered by Mr Bhupen Dev Sarmah strting with children’s egg and spoon race, egg and spoon race for adults, 3 legged race for adults, tug of war to name but a few items.

Nina Goswami then took a lead in testing adult initiative by arranging a competition of dress making by using household refuse such as carrier bags, throwaway papers and ribbons etc with fascinating results. A cultural show followed after lunch introduced by Dwijen Baruah and compered by Nina Goswami in which both local artists participated like Dwijen Baruah, MsTutumoni Bhuyan and Mrs Bhabani Kakati with vocals, Dr Mitam Baruah with a medley on instruments and several fascinating performances by Pranaame and Jayants Bhagawati.

Ranjit K Baruah introduced Mrs Judy and Mr Iain Ross, the Chief Guests for Assam Day at the Gala Dinner. Mr Ross spent many years of his life as a Tea Executive in various parts of Assam. His recollection of the time in Assam struck a chord with several delegates as a lot of people whom Iain remembered happened also to be either relatives or good friends of the delegates. He presented the trophies and momentoes on behalf of the United Assam Association to the invited artists and three long serving members to acknowledge their immense contributions – Drs Rama Bhartia, Nagen Sarmah and Probir Brahma. Dr Nagen Sarmah offered the Vote of Thanks to conclude the proceedings.

Permalink Submitted by shahid al-faruk on Sun, 04/10/2009 - 17:26
I was raelly glad to read the article. wish, if we could do something here in Jeddah. Shahid al-faruk

20 Dec 2017 - 6:41pm | AT News
GUWAHATI: ULFA Commander in Chief Paresh Baruah deeply condoled the sudden death of Mukul Mahanta on Wednesday. Talking to a section of media, the military head of the rebel outfit fighting for an...

27 Dec 2013 - 12:44pm | AT News
The third EMFA media awards 2012 has been postponed to April next year, which will be organised with the fourth annual EMFA awards. The Electronic Media Forum Assam (EMFA) has also asked the...