Come 1 Come All - its Independence Day

When the wind blows, the chaffs get carried away to a state where future lies – for survival and for continuance of its own. The grains where the chaffs existed are present because of the past.

And this story is as old as life in this planet. Life evolved, and man appeared with a very unique ability from rest of the animal kingdom, that is the ability to smile. No other animal has this quality. The first settled civilisation of humans in the Jericho bought new orders which evolved the society, got institutionalised, and evolved into a world in which we live now.

Assam – a land with unparallel diversities from the rest of the world. It hosts flora and fauna that no other region in the planet has, except New Caledonia and New Zealand where ancient flora and fauna exists, that which evolution can be traced from the Gondwanaland era. Now recently some experts commented that Assam alone hosts around 15,000 varieties of butterflies.

Apart from this, the races of human being living in Assam are also very diverse – it is the truest of off all melting pots in the world.

The point at the helm which needs to be noted by all is that to coexist, many diverse races in the fertile Brahmaputra valley there must be some common elements among these races. Although past history depicts that there existed numerous small kingdoms until the Ahom embraced into one whole, and the British gave shape to present day India, which also comprised of numerous small kingdoms until they annexed most of the such kingdoms into there flagship. So, finding the common factors which keep Assam intact is not a big journey. No requirement is there for deep research. We all are parts of that big whole, and we all have that grain of truth within us. Religion can’t be the core, so excluded from the list, and so can be excluded are colour, creed, and tradition. As every human has personality which others can see and judge him or her, so Culture is the face of the society through which other can see it, and here we are probing Culture which has kept Assam glorified from the rest. Language has a very minor role as still many dialects exist in Assam, but, but Assamese is the lingua-franca among its inhabitants although spoken by the majority. So Assamese is a minor factor here. But we are looking into a bigger one – an eagle-eyed view.

To exist any thing, physically or chemically there needs to be ATLEAST one base where something tangible or intangible can show off its properties. That base element in Assam is the Spring season, and the ability of every Assamese to smile with the ripples of the brilliance of Mother Nature. How happy we all become whence our Mother blooms. How many days we keep on celebrating her bounties – it last more than a month.

Like so, Assam, which is an integral part of our motherland – India, which is free, free from foreign powers. We govern ourselves through an institution democratically which is the largest in the world. Assam is not under the grip of someone to stop its people to enjoy another occasion like Bihu on 15th August. No one has taken the right to celebrate this occasion in a festive mood, like that of Rongali Bihu, from Assamese people. How come everybody is taking this day as a mere Holiday? Is it a day to idly spent watching some cheap movie inside the home?

What FREEDOM means? It is a word which can be pondered as “Free” + “Dominance”, which means “free from dominance” of others. So, when we are living in a free nation where we live freely, why is this fear psychosis coming from? Who will interfere us when we are in the mood to celebrate our Independence Day as if it is Bihu?

For Mother Nature we celebrate Bihu, but for the Motherland we keep ourselves so mediocre, why?

Come one, come all, it’s the 60th Independence Day, and let’s celebrate the milestone with pomp and joy! 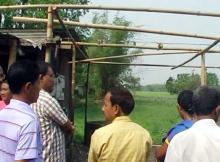 3 Jan 2018 - 10:23am | AT News
DIBRUGARH: Chief Minister Sarbananda Sonowal laid foundation stone of Swadesh Darshan Scheme at Dibru-Saikhowa National Park to develop a theme based tourist circuit in an integrated manner to cater...