Official information tabled on the floor of the Assam Assembly on Tuesday has it that Nagaland tops the list with 66241.69 hectares.

Hailakandi also has lost 1000.00 hectares to the tiny state followed by Karimganj 536.00 hectares and Cachar district has 450.00 hectares of land under illegal occupation by Mizoram.

Meghalaya too is not lagging behind. The state has been illegally occupying total 5473.92 hectares of land belonging to Assam.

Karbi Anglong tops the list of losers with an area measuring 4685.00 hectares.

Even in the both districts of Kamrup, the neighbouring state has been continuing encroachment on a plot measuring around 46.00 hectares followed by 04.15 hectares in Dhurbi district. 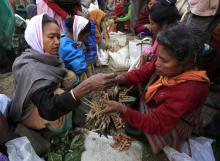 17 Jan 2014 - 8:58pm | AT News
People thronged in thousands in Jagiroad to visit the Joonbeel mela which is concluding on Saturday.The day two of the grand fair focused the historic bartering system participated by the people from...

23 Feb 2014 - 3:55pm | AT News
Sigh of relief for Guwahatians. The hawkers have temporarily called off non cooperation. From Monday morning they would resume distribution of news papers. Addressing a press conference at Guwahati...
Follow @Assam Times