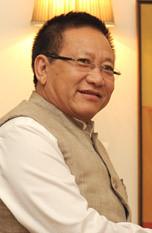 Zeliang, who is on a visit to New Delhi sought help to resolve the issue amicably saying that the massive anger would keep his state on the boil.

Union home minister Rajnath Singh, who invited him for discussion on Thursday assured him if all central help to end the impasse where many influential civil society organizations are nit accepting 33 per cent reservation for women.

Zeliang left for Kohima refusing to quit bowing down to the mounting pressure. The chief minister’s office categorically made it plain that the question of resignation does not arise.

7 Jun 2014 - 8:25am | Lalremlien Neitham
The grand finale of the Miss Mizoram contest 2014 was held last night at the Vanapa Hall in Aizawl and H. Lalchhanhimi was crowned Miss Mizoram 2014 amongst 16 other contestants who took part in the...

18 Apr 2015 - 9:06am | Hantigiri Narzary
The new executive council to the BTAD under BPF party would take oath of office and secrecy on April 19 at a glittering ceremony at Bodofa Nwgwr, near BTC secretariat in Kokrajhar.  ...