Aryabhatta Science Centres would be the nursery for future scientists in Assam: CM

Tarun Gogoi,Chief Minister of Assam, speaking at the central function of Aryabhatta Science Centre at Pragjyoti ITA centre, Guwahati on August 12 at 11 am, stressed the need to motivate the young generation to persue science education and to spread scientific temper among people of the state. It needs mention that government of Assam has already set up 219 Aryabhatta Science centres ,one in each developmental blocks of Assam for making science popular and useful among people.Chief Minister also said that human resource was the most valuable asset and there had been no dearth of talent in the state. He said that such centres could easily solve numbers of local problems of the farmer community. He appreciated the role played by ASTEC (Assam Science Technology and Environment Council) headed by its director Dr.S K Choudhury.

Two students under the guidance of the block coordinator of Aryabhatta Science Centre (219 in Assam) attended the programme. CM distributed an amount of Rs.36500/- along with a colour TV,DVD player with 40 Nos of scientific CDs to each of the centres. The money would be utilized for arranging block level science quiz, model making and other competitions. The winners from the block levels would compete in the district level competitions, An amount of Rs.60,000 was distributed to the Nodal Officers nominated by the DCs. The CM also announced that students who would show excellence in the state level would be taken on scientific tours to reputed institutions like ISRO etc. When the CM announced that government of Assam would also send 10 successful students and coordinators abroad for scientific exposure. Moreover a soil testing kit would be made available in each centre so as to help farmers of the villages. Two mobile vans demonstrating the use of unconventional energy were also launched on the occasion. The vans would travel the villages of the state. Several hundred students and teachers cheered with loud applaud at the declaration of the CM.Latter of the day,noted scientist Dr.Dinesh Chandra Goswami with his story telling science speech entertained the students as well as others.

The interaction of students with noted scientists had been the star attraction of the day. Noted scientists –Dr. Dinesh Chandra Goswami, Dr.S.K.Choudhuri, Dr.R.K. Barman answered volleys of questions on different topics.

Permalink Submitted by rajib shounyak on Fri, 21/08/2009 - 14:58
It is a great pleasure for me to hear about Aryabhatta Science Centre being launched in different areas of our state through the relevant blocks.From my suggestions it will definitely help our students to proceed with success.

Permalink Submitted by Nozir Uddin Ahmed on Sun, 23/08/2009 - 02:39
Thanks to Assam Govt. for generating new ventures in the field of Science, Environment & Technology by introducing Aryabhatta Science Centre. I keenly observed that the students belonging to village areas only will be benefitted and the Municipal and slum of town areas would be deprived because of taking Blocks area only. So, I suggest to include the municipalty area separately for establishing Aryabhatta Science Centre. I hope the ASTEC will success in all aspects of aims. Thanks Nozir Uddin Ahmed Secretary North East Council for Educational Promotion, Goalpara, Assam,783121 Ph-03663-240385, 9854504345

28 May 2010 - 11:51am | sankal
Keeping in view the the agitational programmes launched by the Amri-Karbi's for the last few days, the Assam Government, on Thursday, has declared it's decision to postponed elections in greater... 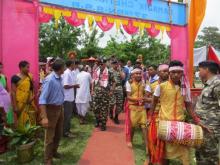 1 Dec 2010 - 5:58pm | Bg Gogoi
A seminar on “Free/Open Source Software (FOSS) in Higher Education and Research” will be held in Guwahati University, on December 3. The seminar will be organised jointly between...