25 Sep 2014 - 10:07pm | AT News
Chief Minister Tarun Gogoi accused the Centre of not taking up flood situation seriously. Talking to reporters in the sidelines of a function in Guwahati on Thursday, Gogoi alleged that the... 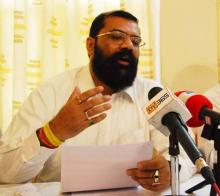 20 Feb 2018 - 9:55pm | AT New Delhi
NEW DELHI: Both Delhi and Dispur were left red faced in Supreme court on Tuesday as the apex court refused to give more time to complete NRC because of the panchayat polls. A division bench of the...