Career CliniQ for the Students 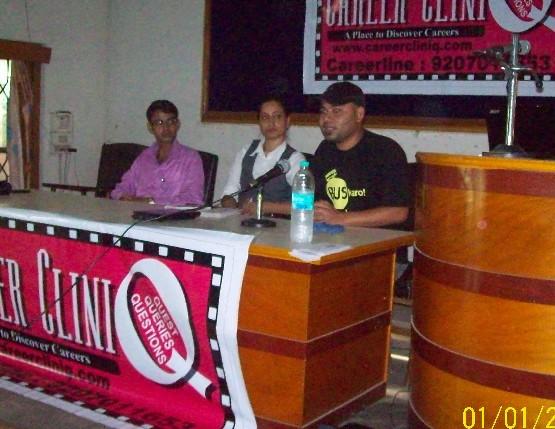 The student community faces considerable confusion with regard to choice of courses that would lead them to successful careers. A lot of time and money is spent to prepare a concrete base for one’s career by taking relevant courses. In case the student chooses a profession, which doesn’t match his personality or intelligence, or in areas s/he is not interested, then all his/her preparation would be a waste and s/he may end up as a poor performer and with no job satisfaction. Students are under emotional stress in selecting courses, due to pressure from parents, peer groups and the society.

In order to provide solutions to problems a specialized education and career counseling cell has been launched in the city by the name Career CliniQ. A press conference was held at the Gauhati Press Club on 9th July which was addressed by Ms Navmita Bhattacharya from Career CliniQ. Career CliniQ is a national level career building organization which aims to help students in determining the right careers for themselves. Career CliniQ’s operations have been simultaneously started in Guwahati, Silchar, Dimapur, Dibrugarh and Dhubri. It has plans of establishing help centers in 12 locations in the next 12 months across the length and breadth of the northeastern region. The unit is led by a team of highly qualified and trained career coaches called the Career Doctors who provide consultation service after assessing the intelligence, interest and personality of an individual to identify the careers in which the individual will succeed and counsel him/her accordingly. All Career Doctors are members of The Indian Society for Training & Development, New Delhi, a national level professional & non-profit society registered under the Societies Registration Act, 1860. It has a large membership of individuals and institutions involved in the area of training and HRD from Government, Public and Private Sector Organisations & Enterprises; Educational and Training Institutions and other Professional Bodies. It helps students to select courses based on their level of intelligence, interests, personality and to prepare for appropriate careers.

Speaking on the occasion, Ms.Navmita Bhattacharjee, Career Doctor, elucidated the significance of identifying the career interests in the students so that they can be guided for the appropriate courses. She added that – “Students remain confused about which colleges to apply under Delhi University once they move out after graduation. Ranjan K Baruah, social activist and career propagandist added – “Students of the region have to be shown that there are careers beyond medicine, engineering and management. Interests have to be generated in other upcoming fields across the spheres of science, arts and commerce so that every students from every stream thinks that he has a chance to make it big.” Mr.Partha Sarathi, Career Doctor from Silchar Branch, expressed his anguish over the excessive pressure of parents to choose careers of their liking.

Bijoya to contest from Guwahati

8 Mar 2014 - 2:28pm | AT News
BJP’s state unit president Sarbananda Sonowal will contest from Lakhimpur while former Union minister Bijoya Chakravartty will be the party’s candidate from Guwahati in the upcoming Lok Sabha polls....