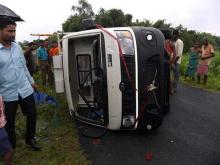 20 Aug 2018 - 7:13pm | Shajid Khan
UDALGURI:   In yet another road mishap,in Panery of Udalguri, 17 childrens were injured when the Mahindra Supro, van they were travelling in overturned at Christianbasti area under Panery PS in...

17 Jun 2008 - 3:21pm | editor
The army killed two more terrorists at an encounter near Namsai along Assam-Arunachal border early in the morning on Tuesday. According to information, the encounter with the Army's Dah Division took...