Dispur turns into a security fortress with heavy deployment of security forces in the capital. Restrictions on the movement of vehicles have been enforced during the winter session of the Assam Legislative Assembly to be effective from December 10 to ensure safety of the public, vulnerable road users, vehicles users and to maintain smooth flow of traffic in and around Dispur Capital Complex keeping in view that several organisations have announced protest actions during the period. 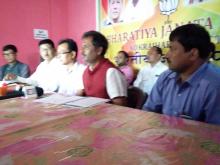