Guwahati: Dr. Samujjal Kumar Bhattacharya has been re-elected as North East Students Organization’s President again. A meeting held at Shillong on Saturday had taken a decision to elect Dr. Bhattacharya as President and Gumsum Haidar, as General secretary of the organization for the coming year. Haidar is a senior leader of Arunachal Pradesh Students Union (APSU).

Guwahati switches off for the third year for Earth Hour 2015

30 Mar 2015 - 2:22pm | Syed Miraz Ahmed
WWF-India celebrated the seventh year of Earth Hour and third in Guwahati through a Cyclothon in the morning, Green Fair, Candle March and a series of programme in the evening here at DighaliPukhuri... 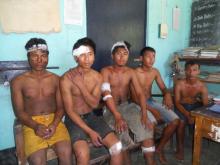 5 NDFB (AT) beaten by irate villagers in Udalguri