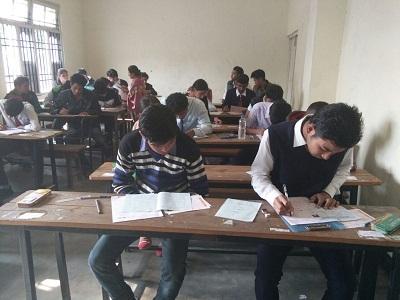 Ten students were expelled for taking unfair means and a teacher was suspended in the HSLC examination which has begun from on  Friday.

A total of 13,723 students are sitting in the HSLC/AHM examinations in 25 centres in Kokrajhar district which was conducted under CCTV survilance and 144 CrPC.

In Kokrajhar district,altogether 13,723 students of which 195 students are in AHM sitting in the final examinations in 25 examination centres with strong super vigilance of CCTV and 144 CrPC  across the district.

As  many as ten students were expelled for taking unfair means in the HSLC/AHM examinations from different centres in the district. A teacher of Makrijhora High school,was identified as Saidhur Rahman for negligence his duty in the examination.

Citizen and guardians of the students expresses their happieness over strong arrangement of examinations from education department in a well strategy. They said that this time education department has made good initiative while maintaining healthy eductaion situation in the state.

Jayanta Kumar Roy,principal of Kokrajhar Govt HS & MP school told that the examination has been conducted under guidelines of education department along with strong security besides survilance of CCTV installed in the examination centres.

20 Jun 2007 - 6:50am | pbaruah
Stung by the cry for PresidentÃ¢â‚¬â„¢s Rule, Dispur is contemplating to corner Prafulla Kumar Mahanta by reopening the LoC scam beside making the Justice KN Saikia Report public.Reliable sources in...