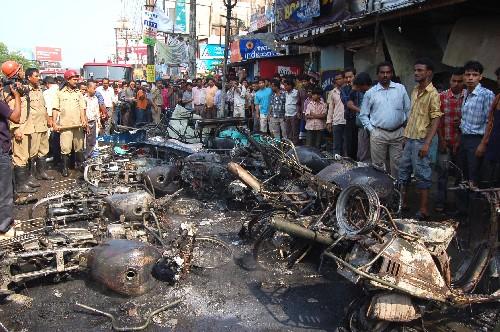 Seven people killed and more than 50 injured, eight of them in critical condition, when a powerful bomb exploded next to Maligaon city bus stand in Maligoan Chariali area in Guwahati on Monday afternoon. Several students are among the injured, as the Maligaon Primary School is situated next to the bus stand. Police blamed the outlawed United Liberation Front of Asom (ULFA) for the attack and said it took place in the busy Maligaon area in Assam's main city Guwahati at around 1.45pm.

Several motor cycles were gutted in the fire at the blast site. "The bomb was planted on a parked motorcycle," senior police official GP Singh said. "The blast comes a day before the ULFA (United Liberation Front of Asom) marks its 30th foundation day and we had intelligence inputs about the group planning some attacks in the city," he added.

On Tuesday, Prime Minister Manmohan Singh is scheduled to address an election rally for the ruling Congress party in Dibrugarh. The area was packed with people when the explosion occurred.

"Among the injured were several schoolchildren who were returning home," said Debajit Das, who witnessed the explosion. The injured have been shifted to the Guwahati Medical College Hospital. A year old infant collapsed at the GMCH premises.

Permalink Submitted by Maina on Mon, 06/04/2009 - 09:03
Why is ULFA killing innocent people like us? What they will get by killing their own brothers and sisters? I urge you please stop killing your own people.

Permalink Submitted by Pankaj on Mon, 06/04/2009 - 09:32
What are the police and army force doing? They are perhaps busy protecting the politicians.

Permalink Submitted by Binoy Singh on Mon, 06/04/2009 - 09:41
All assam police and politician are very poorminded duties have done to the guwahati city. They don't feel about our city will like a "jannat" becasue of they don't know how can lead to our city as a leader.

Permalink Submitted by Pankaj on Mon, 06/04/2009 - 09:47
Our Chief Minister Tarun Gogoi only thinks about how can he earn more money and in future how can he come back for another five years. This type of politicians have no leadership quality and ability to protect the people.

Permalink Submitted by Bharathesh Sp on Mon, 06/04/2009 - 09:56
It Started again. We should not let it happen like this again & again. Serial blasts in Delhi, Bangalore etc now today in Assam. Why does the police & Government not take up major precaution & tight security for the people coming from outside the country? Regards, Bharathesh SP Bangalore, karnataka

Permalink Submitted by Gautam Baidya on Mon, 06/04/2009 - 09:59
We the citizens of Assam are afraid when we come out from our house because we are not safe here. So this is the main minus point of the government.

Permalink Submitted by YK Shrestha on Tue, 07/04/2009 - 06:31
How much the rest of India and the media cares for Assam and North East could be gauged from the way the media went about the bomb blasts. Had it been in Delhi and other parts of India, it would have been 24 hour news, sadly it was nothing like that. So much so, even NE TV didn't bother to highlight it. Today's edition of Hindustan Times has put it in some inside page.

Permalink Submitted by Cteii on Tue, 07/04/2009 - 10:43
I agree the system is to be blamed.. But what about our contribution as young, aware people of the society...? How have we contributed in bringing about PEACE??

Permalink Submitted by Ajoy Warisa on Thu, 16/04/2009 - 11:38
ULFA on one hand and an incompetent police force on other, and Bangladesh centric politicians. Assam will be doomed in next 50 years.

6 Apr 2014 - 3:02pm | AT News
Massive security arrangement is in place in Koliabor constituency where Lok Sabha polling is set to take place on Monday.Polling will take place from 7 in the morning to 4 in the afternoon  in...