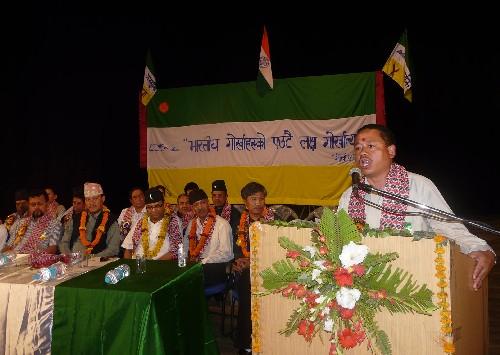 Bimal Gurung, President Gorkha Janamukti Morcha (GJM) – the forefront political party demanding creation of a separate of Gorkhaland in India for establishing the Indian identity of Gorkhas delivering his speech at a convention of Gorkha organisations of North East India at Pragjyoti ITA Machkhowa in Guwahati said that Gorkhaland is not only for Darjeeling but also for North East. He elaborated the activities of formation of Gorkha Janamukti Morcha(GJM) and its Gandhism principle to achieve Gorkhaland by 2010.

Earlier Dil Bahadur Limboo, President All Assam Gorkha Students Union(AAGSU) announced moral support for the creation of a separate state Gorkhaland in India. Gorkhaland cannot be at all only of Darjeeling, it is the aspiration and dream of 12.5 million Gorkhas of the nation to establish the Indian national identity in India. Assam has its own issues to work for united with the ethnic and indigenous people of the region and Gorkhas of Assam is committed to creation of Gorkha Autonomous Council in Assam which is AAGSU's basic demand. At this moment the message of AAGSU on behalf of 30 lakhs Gorkhas of Assam to the Gorkhas of Darjeeling and India is that Assam is not all prepared for a vigorous Gorkhaland movement which will be created outside the territory of Assam so we extend our moral support. If situation demands a do or die movement for national identity of Gorkhas, Assam is always prepared for this. Rooshan Giri, General Secretary GJM and Dr. Harkha Bahadur Chetri Advisor GJM also addressed the gathering. Arun Upadyay General Secy. (Admin) Assam Gorkha Sammelan submitted a resolution by AGS supporting Gorkhaland movement by GJM. Gorkha leaders of the seven North Eastern states also attended the meeting.

14 Nov 2015 - 5:00am | AT News
After losing the opening three games, few would have expected NorthEast United FC to be in contention for a top 4 spot at the business end of the Indian Super League. However, the side led by Cesar...

Me Dam Me Phi at Mohmora

23 Jan 2012 - 11:26pm | Anup Arandhara
Like the other places of Assam, the regional committee of ATASU and All Tai Ahom Yuba Chatra Parishad are organising Me-Dam-Me-Phi at Kakotibari public play ground on January 31. In this occasion...