Mid April the major festival of composite Assamese society the Rongali Bihu begins, this also brings exuberance to the youths even to the aged and kids. As Assam and the Assamese people are gearing up with the preparation of Bihu; UB Photos – a premier news photo agency of North East India came out with full length commercial Bihu Video CD “Jaan Oi Zowan Doi” to be part of this gala celebration this year. The artists and producers released the VCD yesterday in a ceremony in UB Photos premises.

Speaking on the sidelines of the release Chief Photo Editor and Proprietor UB Photos Utpal Baruah outlined how and why UB Photos conceptualized on making of a Video Cd though it was a established name in still photography. Baruah reasoned that with visual media and editing set up being established in UB Photos; we tried to give a click with all freshmen in the technical setup. Directed by young director Kumar Sanjay Sarkar and freshman cameraperson Utpal Kalita the VCD is of standard quality. Most of composition through out the VCD has been given a second thought that is how the entire film becomes a good watching stuff. The fresh visual editor of UB Photos Pranab Bhuyan have done a wonderful job as well with sequence order, sound mixing and other editing activities. The entire UB Photos team has worked heart and soul to present a fabulous gift to the people of Assam this Rongali Bihu.

“Jan Oi Zowan Doi” has cast Kapil Borah as Jugal and Ratul Das as Pranab both ambitious village boys who come to Guwahati city to full fill their dreams. But they do not find any suitable employer or even a house to live in. In dilemma they lie and occupy a good accommodation in LP’s (Siddharta Mukherjee) house as tenants. Madhumita (Bhranti Medhi) is a pampered only daughter of LP who falls in love betrayal actor Pranab and her cousin Nandita (Zerifa Wahid) who comes to stay with them falls in love with Jugal an architect as lied to them. Alas! They (LP and family) come to know about their truth. The VCD however has a happy ending amidst tragedy, comedy and heart throbbing songs. Nishita Goswami appears as Guest Appearnce in a song. Acting by kid artist Rajhshree is really appreciable and it can be said from her skills that she owes a bright future in cine industry The other cast Lipika Bora Medhi, Kishor Choudhury, Debo Barman, Junali, Puspha Mishan and others. Bappa Ahmed, Ashim, Uday and Chandan have choreographed the dances and Ranjit Gogoi composed music. It is worth mentioning that songs have been sung by gen-X singer Zubeen Garg, Bollywood heartthrob Sonu Nigam, Jitul Sonuwal, Saswati Phukan and Sandhya Menon.

Actor Kapil Borah, Nishita Goswami, Sidhartha Mukherjee and the entire cast also spoke at length on their experience working with the UB Photos film unit. Produced by UB Photos the VCD has been supported by grassland, Reliance Mobile and co- produced by CEC Educational Group and Master (India) Brewing Company. The executive producer is Vinod Kumar Jain. During the release ceremony Dipankar Dutta, President CEC praised the efforts of all members of UB Photos and the film unit for their untiring effort behind the VCD. He expressed his desire to support and promote any group who is ready to come up with such commercial projects. A member of UB Photos termed it as leaning experience. A host of media persons, well-wishers and sponsors were also present during the release. The VCD is a must watch one this Rongali Bihu.

13 Jul 2015 - 10:10am | AT News
Chief minister Tarun Gogoi is on a visit to New Delhi on Monday.Sources confirmed that during his two days visit to the capital, the chief minister is scheduled to attend Sonia Gandhi’s Iftar party... 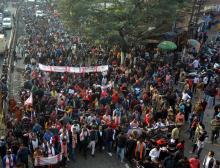