A devastating fire that broke out at Paltanbazar area in the city of Guwahati ravaged properties on Monday morning. According to information, the incident took place at a Building which later was spread ollowing the burst of a few a few LPG cylinders.Fire tenders were called to douse the fire and no one was injured in the incident.

9 Nov 2013 - 5:13pm | AT News
Yet another gruesome murder of a woman in Guwahati has sent no less shockwaves across the state where the perpetrator happens to be her husband who surrendered before police on Saturday.The incident... 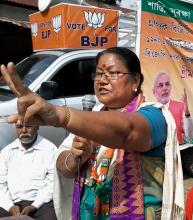