Dubai based "Axam Xamaj", (Assam Society, UAE, Dubai) celebrated Magh Bihu on Friday, the 16th January, 2009, with a day long program. The venue for the celebrations was the scenic Creek Side Park, located right in the heart of the city of Dubai. The program witnessed the participation of an unprecedented number of about 175 including tiny tots and babies in arms. A fairly large number of new faces took part for the first time in such a community gathering in the UAE. The participants in the get-together included a number of guests from back home in Assam, who were in UAE visiting their relatives and friends.

Guests started trickling by around 10 although the full house was seen only by late noon. The delay was not unexpected due to the cold winter morning and threat of rain looming large since the previous few days. Luckily, proving the weatherman wrong, a bright sunny afternoon brought cheers to everyone.

Not unexpectedly the breakfast continued till well past noon with Chira, Doi, Mithoi, Larus of Til and Narikol (all locally made – courtesy Das and Bharali families), Mitha aloo Xijuwa etc. etc. Til Pitha and Chunga Pitha brought all the way from Assam specially for the occasion, added more Bihu Flavour to the occasion.

Enthusiastic volunteers conducted innovative games for all ages. Spontaneous reaction from everyone was remarkable. People did not miss the chance of enjoying the great weather and ambience of the park.

Keenly contested ‘Koni Juj’ were won by Sanakmuni Adhikari (Abu Dhabi) and Tapan Das (Dubai). The first and second prize winners in ‘Amlakhi on Spoon Race’ for male were won by Dhrujyoti Chaliha (Abu Dhabi) and Tapan Das (Dubai), while the ladies version of the game saw the first three prizes bagged by Momy Dowerah, Hamida Begum and Jasmine Borah – all from Dubai. Another tradinional game – Tekeli bhanga – which was open to all – saw Ms Kanchan Bharali (Dubai), Rashmi Hazarika (Dubai) and Dharmananda Mazumdar (Abu Dhabi) claim the first three spots. Running Race for male were won by Kartik Borah and Rajiul Islam from Dubai. Among other games, the race of running backwards were won by Arnav Borah, Kartik Borah and Iswar Prasanna Das – all from Dubai. Children’s sack race were won by Rohan, Natasha (from Dubai) and Soham (Sharjah).

Although the lunch did not comprise entirely of traditional Assamese dishes, items such as fish curries prepared of Rau and Kawoi along with ‘bengena pitika’ which prompted everyone to go for large helpings of these rather ‘rare’ dishes in the Emirates.
The Group Photo session was arranged immediately after the lunch – not taking a chance to miss out those who had to leave early. For a change, a lot of cameras were seen in action !

The celebrations concluded with the prize distribution ceremony and a round of ‘Tambola, conducted by Siba Bora and Dipak Tumung.

The photographs of the celebrations can be viewed at http://community.webshots.com/user/borahdxb

Victim of terrorism - the common man

17 Sep 2008 - 7:17pm | editor
Recently I had the privilege to hear Mr. Ajit Sahi, the Editor-at-large of Tehelka, speak on the 'Myth Of Terrorist Organisations - SIMI fictions'.His painstakingly collected and carefully analyzed... 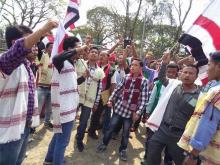 18 Dec 2009 - 10:10pm | Nava Thakuria
Hectic negotiations among the climate negotiators from different countries, never ending protest and demonstrations carried out by various activists in the freezing cold winter and unbelievable...