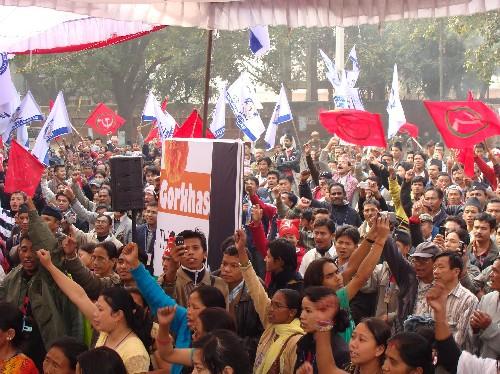 It was a historic gathering of thousands of Gorkhas at Jantar Mantar in New Delhi at the Bharatiya Gorkha Parisangh's Gorkha Samavesh to press for the creation of a separate state of for the Gorkhas in India.In addition to a huge congregation of Parisangh members, almost one thousand activists of the Communist Party of Revolutionary Marxists, led by its General Secretary R B Rai, also participated in the gathering. The National Federation of Small States was represented at the rally by its coordinator P Niroop of Telangana and actor-politician Raja Bundela, who is spearheading the movement for Bundelkhand.

Also sharing the dais with the BGP were the Sikkim Prajatantrik Congress and the Gorkha Democratic Front of Uttarakhand.

Even as Jantar Mantar was resounding to Gorkhaland slogans, the programme to send faxes in favour of a new state continued to clog the offices of the President, Prime Minister and the Lok Sabha Speaker. Thousands of faxes have been sent from all over India to complement the Gorkha Samavesh at Jantar Mantar. At one point of time, the Lok Sabha Speaker's staff called Parisangh officials to complain about the faxes reaching their office. They even threatened to disconnect the fax machine, but were firmly reminded that it was the constitutional right of all citizens to contact their public representatives.

The proceedings at Jantar Mantar began with a rousing singing of the BGP's Jagaran Geet and Jantar Mantar was awash in the blue flag of the Parisangh and the red ones of the CPRM. The representatives of the Parisangh's 22 state units offered soil and water from their states at the statue of Shaheed Durga Malla of the INA installed at Jantar Mantar. The soil and water were used to plant saplings that will now travel to the 22 states to be replanted at important Gorkha landmarks there.

Among the large number of Gorkhas at Jantar Mantar were retired armed officials, bureaucrats, academics, professionals, cultural and literary icons and artistes.

BGP Secretary General Sukhman Moktan reminded the country that Gorkhas had played a stellar role in the freedom struggle and even now defends the borders. Yet they have had to live in their motherland with their nationality constantly being questioned. He said the demand for a new state was not about economic development of Darjeeling and Dooars but about the political identity of 12.5 million-strong Indian Gorkha community.

Former Lok Sabha member R B Rai, general secretary of the Communist Party of Revolutionary Marxists, said that the sacrifices of the Indian Gorkhas had to be recognised by the country and that it was important to make Delhi the focus of the movement for Gorkhaland. He said the time had come to unite and fight for Gorkhaland and committed himself and his party to the attainment of a separate state for Indian Gorkhas.

Permalink Submitted by YK Shrestha on Sat, 27/12/2008 - 16:30
After Independence, Gorkhas were the only indigenious community in the North-East who were deprived of a seperate state. Justice has to be done now!!

Permalink Submitted by kamal pradhan on Mon, 29/12/2008 - 18:22
Gorkhas have a huge contribution in the freedom movement of india, should enjoy equal status as other communities in india

Permalink Submitted by krishna kr. pradhan on Fri, 01/05/2009 - 08:45
I fail to understand the Parishangha's demand for Gorkhaland. I came to know that Parishangha is demanding Gorkhaland without specifying any area in the Indian Union. Which, I think, is no State Government will carve out their territory to create Gorkhaland. But , I strongly belief that we should concentrate on one point and one goal. The need of the hour is that We all the Gorkha/Nepali of India should support GJM movement for separate Gorkhaland

25 Mar 2016 - 9:50pm | AT Kokrajhar Bureau
The Songbijit faction the National Democratic Front of Boroland(NDFB-S) slammed the Bharatiya Janata Party(BJP) for its failure to implement the promised and during the 2014 Lok Sabha election in the...