27 Dec 2016 - 9:10pm | AT Kokrajhar Bureau
A training was held involving government employee,bank staff, civil society and NGO organisers with the theme of ‘Go for Cashless,Digital India’ at DC office conference hall on Tuesday in Kokrajhar...

16 Nov 2014 - 10:22pm | AT News
Come January. Save rhino mission will rent the sky. Courtesy John Abraham. The Bollywood personality who owns the North East United FC in the Indian Super League will kick off a CSR campaign to save... 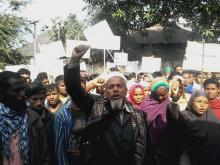