Body of 14 years old Sumit Baspor S/O Sambhu Baspor and resident of Harijan Colony rescued on Saturday Morning.
As per information, Sumit got drowned in Dimru river in Hojai on Friday eevening, while he along with  three others  went for the immersion of the idol of Lord Ganesha.

As soon as, Hojai Police got the information they reached the spot and immediately  SDRF team was called to rescue.

Repordetly, Sumit was the student of class 6  in Skylark English Academy. A pall of gloom casted in the school and condolence meeting was held in school after that holiday was  declared on Saturday.

After that the students of class 8, 9 and 10 visited the house of Sumit. They prayed for the eternal peace of the departed soul and strength for the bereaved family members.

Talking to this Correspondent, Sumit Dutta, Principal, Skylark English Academy said," We are deeply saddened with the  sudden death of Sumit, he was a bright student and use to participate in all the events of the school."

On the otherhand,Hojai Police apprehended two persons on Friday night and another two on Saturday, as they pelted stones on police officials on Friday evening, as Sumit Baspor couldn't be traced.

The four were produced before court and later on sent to Jail.

3 May 2012 - 12:55am | editor
BSF officials are set to hold a crucial meet with their Bangladesh counterparts to discuss the recovery of the victims on the river Brahmaputra in Dhubri. A flag-meeting would be held on the... 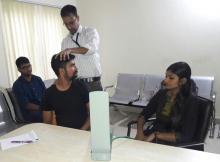