A three days Shanti Sadvabna Workshop was held at Gaonburah Bhawan in Kokrajhar to share view and exchange of integration among public from riot affected areas of the BTAD districts.

BTC executive member Doneswar Goyary graced the workshop today and interacted with peace worker stressed to create peace and unity among society in the region.

Sushree Radha Bhatt, chairperson of Gandhi Peace Foundation told that the foundation has been  working for the peace and unity among multi community in the region as the region had witnessed ethnic riots in 2012 which had created resented among common peoples.

She said that the foundation has also eyedstable unity and development in the region and urged the society to go ahead with strong steps to bring healthy and suitable situation in the region.

Bhatt, administered oath of non violence and social integrity among various community in the region in the workshop and maintaining that peoples should be equipped well and consciousness whole stepping new status of the society.

Arms and ammo seized in Dibrugarh

4 Mar 2012 - 3:35am | editor
Security forces in Dibrugarh district seized a huge cache of arms and ammunition were on Saturday. Acting on a tip-off, troops of 18 Jat Regiment conducted a search operation at Kochunio village... 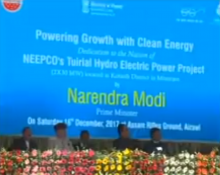