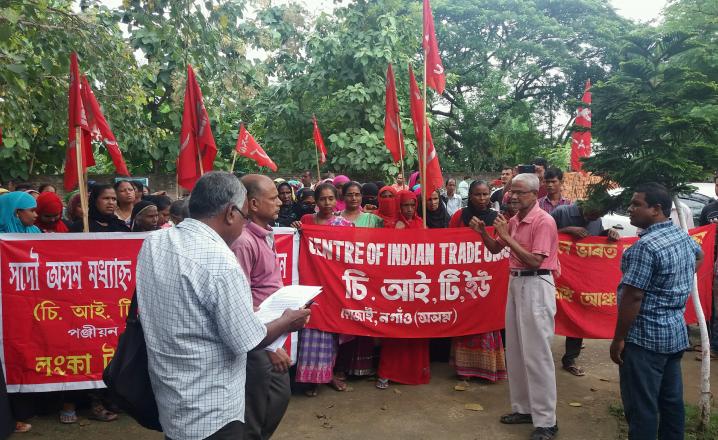 Hojai District Unit of Centre Indian Trade Union (CITU)  took out a rally on Thursday as a mark of their protest against the move of central government on Labour Law reforms.

The rally after passing by main throughfares of the town  culminated at Circle office were the Hojai district CITU President GP Chakraborty  and General Secretary Jugeswar Das forwarded a memorandum to Prime Minister Narendra Modi through CO Mridusmita Bora.

As per the memorandum the move of central government to curtail the 44 Labour Acts by introducing four code and labour laws is hasty decision.In the memorandum it has been stated, already two bills viz., Code on Wages Bill and the Occupational Safety, Health and Working Conditions Code Bill has been introduced by Government  in Lok Sabha.And, on July 30 last, Code on Wages Bill was passed in Loksabha. By which now daily wage of Rs 178 has been fixed for Labours. As per CITU which should be Rs 600 per day. On the other hand, Code on Occupational Safety, Health and Working Conditions Bill 2019 has been brought to repeal 13 existing Labour laws, which will drastically curtail the workers’ rights, in their most obedient services of their corporate masters.

As per General Secretary Jugeswar Das,"  This new reforms  will weaken labour laws  and would be detrimental to the interests of the workforce in the country." He termed it as anti-worker legislations, ignoring all norms of international labour standards and is preplanned for the benefits of corporate masters.

13 Apr 2014 - 11:06pm | Hantigiri Narzary
Jahedul Islam of  Kamrup(Assam) and Kiranjit Kaur of Punjab were announced as first position in both men and women category of hill trekking competition in the ongoing Second Bbaukhungri...

7 Sep 2013 - 12:17am | Syed Miraz Ahmed
Several environmentally ‘unfriendly’ projects in Assam and other Northeast Indian States are being touted as sustainable, receiving funds under the United Nation’s Clean Development Mechanism,...