Moving from the world of digital connection some youths from Guwahati formed an organisation named 'Utthan'. The meeting was convened by some member from an online community named 'Axom: Amar Matrbhoomi'. Al together 18 young professional and student from different background came and discussed about the recent serial blast. The meeting was held at Bharalu in Guwahati. All the participants condemned the blast and asked the government to find out the culprits at an earliest and make the life of common citizen secure. The genesis of convening the meeting was spontaneous reaction to the serial blast that took place in 4 district of Assam on 30th October. All the participants felt that the state is going to face serious problem due to illegal migrants form Bangladesh and asked all the people to stand against the illegal migrants. The members also felt the threat to the culture and language due to increasing doubtful citizens. The members have shared their feeling and committed to work for restoring peace in Assam. They have conveyed another follow up meeting on 9th November to give a proper shape to the newly formed organsiation. Youths interested to join in the group may dial 98640 94137.

Permalink Submitted by DHIRAJ KOCH on Mon, 03/11/2008 - 03:07
Great job friends.. I am with you all.. In fact I have passed on the message to all my friends.. Hope it will gather momentum and become a storm strong enough to drive away even the deadliest of all terrorists..

Permalink Submitted by hemjyoti das on Mon, 03/11/2008 - 05:09
its a great effort indeed.. but someone please let me know the objectives and mission of the group.

Permalink Submitted by Md Mukibul Islam on Mon, 03/11/2008 - 06:48
Great job guys. I am with you all. Really we should take stern steps to eradicate these evils from the heart of this world.

Permalink Submitted by Ibu Sanjeeb Garg on Thu, 13/11/2008 - 06:22
What we have started here is just the beginning of the battle that lies ahead who we are ..people fighting for our existence and we know we will keep fighting or else get vanquished but we wont go down without a try.

Permalink Submitted by Avinash on Thu, 13/11/2008 - 19:28
Good move friends. As I have always stated, we only have each other in this fight against evil, and we cannot depend on the government. So together we stand, divided we fall...

Permalink Submitted by BHIM RAJ BHANDARI on Wed, 03/12/2008 - 01:31
Its a very good initiative by the members. This is really a holy initiative to awake the people to fight against the bad elements. It should reach to each and every indivisual...

Permalink Submitted by Hirok Jyoti Bora on Thu, 15/01/2009 - 13:22
Is it the same group which is associated with the Indo Pak Signature Campaign few days back at the Book Fair? I was searching about Utthan , i got this link from one of the search engine. 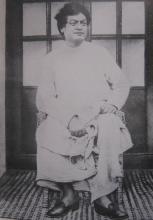 The unknown side of Swami Vivekananda

6 May 2014 - 11:15am | Rajiv Roy
Exactly 113 years ago, on 27th April 1901 Swami Vivekananda gave a historic speech that not only pierced his countrymen but also the then Chief Commissioner of undivided Assam, Sir Henry Cotton and...