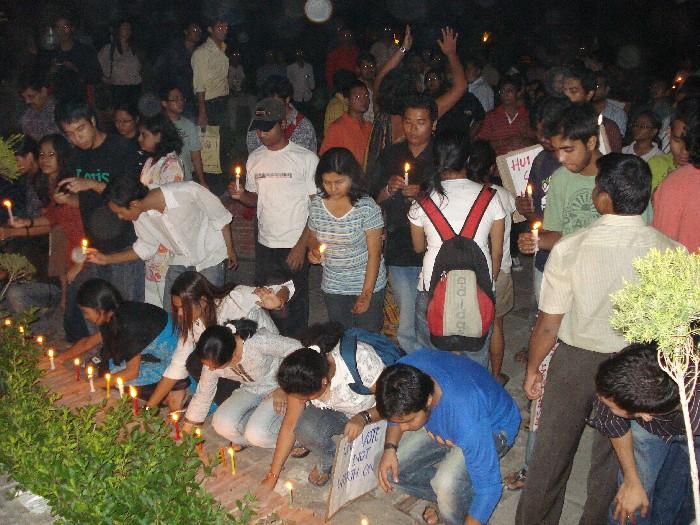 The students of Delhi woke up today against the serial blasts in Assam. A large number of students took out a protest rally in Delhi University, North Campus and traversed the whole Delhi Univesity Enclave this evening.The march started at around 4.30 pm and went infront of locations such as Kirori Mal College, Ramjus College, Hansraj College, Delhi University Faculty of Arts, Gywer Hall and the Vice Chancellor's residence. They returned to the Vivekananda Statue where they lit candles and prayed for blast victims.

This was a crowd of more than 700 students which consisted of students from all parts of India. They raised slogans in Assamese and Hindi against the Assam government and demanded peace and security at all costs. Their slogans, such as Tarun Gogi Hai Hai, Tarun Gogoi Down Down, Assam Government Wake Up, Sunor Asom Ghirai Diyok Tejor Asom Amak Nalage, underlined their traumatised state and also that they have lost faith of the current government which has so clearly failed to maintain internal security.It clearly showed the anger of the new generation and their persistent faith in peace inspite of the repeated attempts of the terrorists to break the internal fabric of the country.

Permalink Submitted by Himjyoti Talukdar on Sun, 02/11/2008 - 16:52
There should be a revolution against terrorism and this type of protest is a spark of revolution.

Permalink Submitted by Tearful assamese on Sun, 02/11/2008 - 20:14
On 2nd of Nov, a protest march is being organised from MG Road to CTO circle, Bangalore at 5 pm for peace and for all those who died in the Assam blast. Please spread this message.

Permalink Submitted by Ajoy Warisa on Sun, 02/11/2008 - 23:10
Assamese all over the world is feeling the impact of the blast except for our govt. Govt. should come out with a white paper regarding the number of Bangladeshis.

Permalink Submitted by pankaj dutta on Mon, 03/11/2008 - 18:57
The steps taken by the students and the working section of Assamese residing in Delhi and NCRis a significant effort which proves that.. though they r not in Assam..during the massacre but still feel for the same...by organising this kind of rallies in the capital.the government should wake up now its no longer a silent state if the students of Assam who are the new generation the future of Assam is no longer willing to support this kind of policies with whom the political parties are going to built the golden Assam.......this is a question every youth of Assam asking this days

Permalink Submitted by Dhruv on Mon, 03/11/2008 - 21:21
Well I am proud that I was a part of the rally. It is high time that government take necessary action for protecting the life of innocent people. It may be any group responsible for the blast but what we want is a permanent solution to the problem. we thanks all the students who participated in the noble cause keep up the good work going guys

Permalink Submitted by dipankar kashyap on Mon, 03/11/2008 - 23:24
Save Assam from terrorism. Lets all unite together and fight against it.

22 Aug 2015 - 2:33pm | AT News
KMSS president Akhil Gogoi on Saturday came down heavily on Sarbananda Sonowal alleging that the Union minister has not been able to fight for Assam and its people. Gogoi called Sonowal a puppet...

9 May 2013 - 10:28pm | AT News
Police claimed to have captured a top Maoist leader on Thursday.Identified as Anukul Chandra Naskar, 65, a politburo member of the Maoist leader was taken into custody from Barak Valley Wednesday....

16 May 2013 - 8:44pm | Abdul Gani
Three teams of school children from Assam – two from Nagaon and one from Tezpur in Sonitpur district – have made excellent presentation in a global teleconferencing coordinated by the civil...