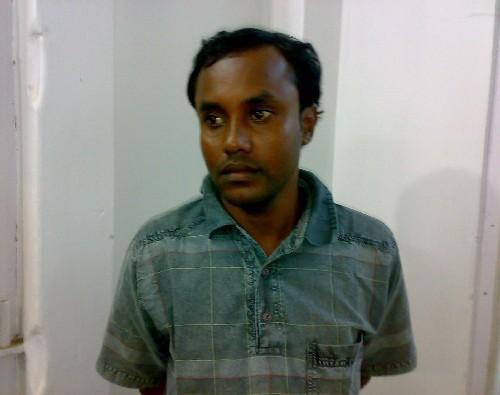 The owner of mobile number 98646-93690 of one Nazir Ahmed of Moirabari in Morigaon district of Assam was taken into custody by state police from where an SMS reading "We, ISF(IM) take responsibility of Thursday's blasts. We warn all of Assam and India for situation like this in future.We thank all our holy members and partners...Amin' was sent to city based news satellite channel News Live last night.

Interrogation is on and more details are awaited. Islamic terror group named Islamic Security Force (Indian Mujahideen) in short ISF (IM) have claimed the Thursday's serial blast that rocked Assam in particular and the nation as a whole that claimed 80 lives so far and injuring more than 380 persons and some 50 critically through a SMS sent from this person's number .

Permalink Submitted by Annonymouse on Mon, 03/11/2008 - 15:52
@Anjan Saikia, you never know this guy may be innocent as we all know these terrorist has no Religion / No Relations .. they will kill anybody. So who knows maybe they only used his cell phone to send that SMS.

Permalink Submitted by Anjan Saikia on Tue, 04/11/2008 - 01:48
Mr. Anonymous, Think about these points: ::::::: 1. By saying "terrorist has no Religion", perhaps you are going back many decades and talking about Communism related attacks or Separatist activity etc.. :: What happened in Assam in recent days is clearly a result of global religious-politico activity. These guys even have their first name as "ISLAMIC" Security Force... now you tell me :where do you see NON RELIGION element in 'ISF"? :::: 2. I don't even call these guys terrorist, they are FANATIC IDIOTS backed by a very nasty religious-political (I don't have to name the religion right!) group/agency/country to kill people. They are JIHADIS and there is a clear distinction between a Terrorist and a Jihadi (for example: Terrorists don't earn five wives in heaven when they die, but a Jihadi does, very funny, but Jihadi's take it seriously..) :::: 3. Finally the cell Phone Game : You are saying "who knows maybe they only used his cell phone to send that SMS" :: who would know?? of course Najir himself, right! OK, for a second, let me buy your stand that he is innocent, then in that case, NAJIR should come out and disclose the name of those people who borrowed his phone.. by doing this he could prove to be a true 'deshbhakt'.. what do you say! :::: Mr. Anonymous, Would you Please say "Jai Hind" and "Jai Ai Asom" with me and lets hope that our very efficient(!) Police would be able to capture the root. Anjan Saikia. USA.

Permalink Submitted by Annonymouse on Tue, 04/11/2008 - 22:55
OK agreed with ya Anjan Saikia :-) and well sure jai Ai Asom. I am an Assamese first so I prefer saying that instead of jai hind.

Permalink Submitted by Indian on Wed, 05/11/2008 - 06:12
@Anonymous, this is the attitude which got us where we are today. A land of vulnerable people with hostile immigrants on one side and demagogues like Gogoi and company on other side. "I am an Assamese first so I prefer saying that instead of Jai Hind", What are you thinking. Let me hazard a guess, you will go out on a limb to support separatist no-gooders, may be you did. You do not like to say Jai Hind ??? well a step towards the Islamic mindset, remember they are them because of their puny level of thinking, surely you are a much educated and open minded person compared to these lungi clad, beard sporting human parasites. Ask Anjan Saikia, since he resides out of the country; I am pretty sure when asked, who he is, his reply is "I am an Indian", cause that my friend is our Macro Identity. I was born and brought up in Guwahati and am proud of it, but that doesn't stop me loving both my state and the country. So I say scream at the top of my lungs. JAI HIND and JAI AAI AXOM.

Permalink Submitted by Annonymouse on Wed, 05/11/2008 - 19:58
Sorry disagreed with you INDIAN, what we are going through now is all because of those corrupted CMs like Hiteshwar Saikia etc. they ruined our Assam and Paresh Barua who sold our country in the name of arm struggle and business minded fascist. You are happy saying JAI HIND so say it but judge no one on what they prefer to say. fact is we are Assamese first and right not we have to be doing something for use and for the people of Assam so let us instead look forward to that instead of making judgments on each other?:-)

4 Jul 2010 - 2:44pm | editor
Assam chief minister Tarun Gogoi says his government has no control over the autonomous bodies set up under the Sixth Schedule. Talking to reporters in Dispur on Saturday, Gogoi questioned the...

11 Oct 2010 - 5:56pm | Aiyushman Dutta
Indo-Chinese relations received a shot in the arm when the 2010 World Congress of the Chinese Elite held at Xian on October 9 presented a special award to an Indian for “International...

14 Apr 2018 - 9:01pm | AT News
ITANAGAR: A Catholic bishop from Arunachal Pradesh received the Bharat Gaurav Award at a ceremony in UK  on Friday fetching huge glory for the north east. He is none other than Bishop (Dr...