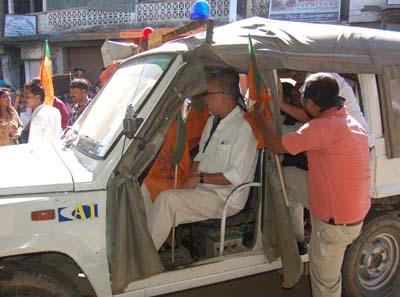 As BJP activists were rallying in protest of Thursday's blast from party office at Maniknagar(Nursery) at RG Baruah road to Dispur secretariat a small mob like situation was seen at Ganeshguri Chariali. CRPF personnel arrested all the BJP activist including National vice president Smti. Bijoya Chakraborty and Assam Pradesh president Ramen Deka. The protestor were shouting anti-government slogans. After the situation curfew has been re-imposed and security has been alerted despite the city has a deserted look due to the band.

When reports last came in Prime Minister Dr. Monmohan Singh, UPA Chairperson Smti. Sonia Gandhi and Union Minister from Assam Sontosh Mohan Dev has already flown from New Delhi and will be arriving at 2pm and will be in the city for 3 hours. In between they will be visiting injured at GMC Hospital and blast sites so far a media conference has not been called. They will also take note of overall situation in Assam. Meanwhile state police has raided Moirabari area to locate the youth from whose cell phone the blast claim responsibility by ISF(IM) was claimed. Situation in Guwahati is still troubled torn and fearful.

Permalink Submitted by mit on Sat, 01/11/2008 - 20:35
Come, lets take political advantage of the situation !! when the people are dying in hospitals tell them.. "if you survive please vote our party !" .. shame on you guys, when the state is crying, you people are busy taking political gains... We all know what the governments are doing for Assam...

20 Jan 2008 - 3:22pm | pallavibarua
No sooner the International Olympic Committee gave the green signal to China for hosting the 2008 Summer Olympics, the Chinese Government has been busy renovating and constructing some of the...

9 Apr 2018 - 9:06am | Jacob Islary
Sonapur : A group of social work students in Assam organised a workshop on menstrual health and hygiene for high school girls of a rural village near Guwahati, Assam. The workshop held at...