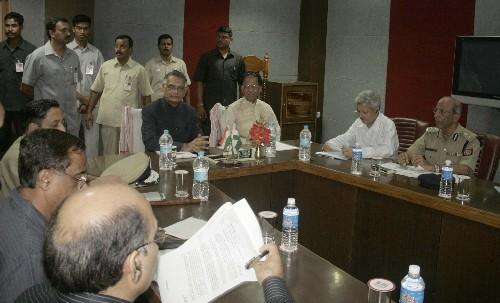 A high level security meeting was held at Raj Bhawan yesterday late night in presence of Union Home Minister Shiv Raj Patil, Chief Minister Tarun Gogoi, Assam Govt. Chief Secretary, Director General of Police, Principal Secretary (Home), Home Commissioner and other senior officials. The Union Home Minister, Shivraj Patil asserted that stern action would be taken against those involved in the serial blasts, which resulted in the death of more than 77 persons so far. The Union Home Minister arrived in the city this afternoon and immediately after his arrival, he flew to Kokrajhar - another blast site to take stock of the situation.

The Union Home Minister expressed his sympathies to the family members of those killed in the blasts and assured that the Centre would extend all necessary help to the State in this hour of crisis. He said that the steps taken by the State Government so far were in the right direction and hoped that such actions would enable the State to cope with such eventualities in future.

The tour programme of Patil has been rescheduled and he is stayed back in the city tonight. He is likely to visit Barpeta today morning to take stock of the situation.

Mean while indefinite curfew has been relaxed in the city except Ganeshguri area. But then Bandh in protest of the Thurday's terror attack has paralyzed the city. Several organisations have called for bandhs to register their protest against yesterday's serial blasts that took over 77 lives so far. While the Sadou Assam Karmachari Parishad (SAKP) has decided to observe November 1 as a black day in protest against the blasts, the Asom Jatiyatabadi Yuba-Chattra Parishad (AJYCP) today burnt the effigy of the jehadi and fundamentalist forces. Members of the All Guwahati Students' Union (AGSU), the city unit of the All Assam Students' Union (AASU), burnt the effigy of the Union Home Minister in protest against the failure of the Central Government to check illegal migration and infiltration of the Bangladesh-based jehadis.

Candle peace rallies calling for peace and harmony and expressing condolence to the victims of the blast last evening. City based fm channel BIG 92.7 FM, some youth organizations and artists association took out peace rallies to Dighalipukhuri par.

Permalink Submitted by Pravin on Sun, 02/11/2008 - 01:04
No solution is going to be achieved from peace rallies. Hindus go back to Geeta. Did Lord Krishna preach Arjun to talk peace to Kauravas. He asked him to fight because that was the language that Kauravas understood. Hindus take to arm and fight the Muslim Bangladeshis. Ulfa is employing the right means but to a wrong end. They should take arms against the Bangladeshis Muslim but they have taken arms against the Indian state. They cant survive as an independent country. Bangladeshis will inundate the state and incorporate a weak independent Assam into Bangladesh. I appeal to ULFA to turn the guns towards illegal Bangladeshis. Hindus, you are not weak. Look to your mythology. Britishers emasculated you by drilling into your brain that Hindus were always under foreign rule. Take arms and teach these Bangladeshis in the language they understand..massacre

Permalink Submitted by Sangeeta on Sun, 02/11/2008 - 05:14
So whats next Mr.CM? Add some more security vehicles to your convoy? Or hey, here is an idea- why don't you just admit that you are useless?In the name of saving the state, all you morons have done is make a mess of it. Our forefathers fought for the freedom of this country to become slaves of some selfish crooks. What kind of liberty is this where you have to live with fear every freaking day?And yeah, you bloodsucking politicians, keep blaming it on others. That helps.

27 Mar 2017 - 6:46pm | AT News
Dhemaji police got remand of Soobodh Biswas for nine days after the main accused in the Silapothar incident was produced a lower court on Monday. The Chief Judicial Magistrate agreed to sent him to...