The Centre on Friday expressed grave concern over the serial blasts in Assam a day after the state was rocked by serial blasts leaving 75 dead and over 470 injured.

Rattled by the state’s biggest ever serial blast in Assam, the Centre held a cabinet meeting which asked Union Home Minister Shivraj Patil to leave for Guwahati on Friday itself.

Talking to media persons after the meeting, Finance Minister P Chidambaram said, "The Cabinet meeting expressed serious concern over the incident and extended sympathy to the next of kin of those who lost their lives, The Home Minister has been requested to take immediate necessary steps.”

Home minister Shivraj Patil is leaving for to take the stock of the situation after serial blasts in the state. On the other hand, senior BJP leader and L K Advani, is visiting the state later in the day.

Meanwhile, the Home Ministry has sought an immediate report from the Assam government on the serial blasts in Assam. Hours after the blast, Home Secretary Madhukar Gupta spoke to Assam Chief Secretary to find out the details of the incidents., He has sought a detailed report from the state government on the blasts in several districts including Barpeta, Bongaigaon and Kokrajhar.

Back home an eerie silence s prevailing in the state and the authorities are fanning security forces to nab the culprits involved in the blast. Till now as many as 15 people have been rounded up in this connection.

Friday is an undeclared bandh and schools, offices and other establishments are remaining closed. A seven-member National Security Guard (NSG) team has already reached Guwahati to identify the explosives used in the blasts. 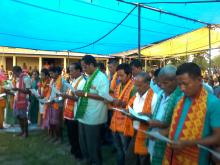