Kokrajhar:: A huge saplings plantation drive was organised at Abhayakuti along the Chakrashila Wildlife Sanctuary near Jhornagra forest area in Kokrajhar district on Sunday.The drive saw huge participation from forest department official,NGOs and local villagers from the greater Jhornagara area to make green Bodoland/green Assam in the area.
The plantation drive was carried out jointly by BTC tourism department,Forest department in association with Daokharaja NGO,Owabari and Jwngthimathi NGO,Kokrajhar. Over 5000 saplings from various varieties were planted along the Chakrashila wildlife near Jhornagra and the drive will continure till three months beginning from Sunday(April 29) to make green Bodoland and green Assam.
The plantation drive will encourage the common citizens to plant sapplings to make healthy natural scene as well beautiful environment.Different varities of fruitbearing saplings,which are included Gamari,Jack,mango were planted during the drive.
Peoples of the area expressed their happiness after seeing sapling plantations along the Abhayakuti area. The plantation programmes will encourage peoples to carry planting of saplings among the citizens.
BTC Tourism Officer MC Brahma told that the plantation programme is being initiated to make green Bodoland/green Assam in the region.The forest as well natural balance environment must be managed and wildlife be protected,Brahma said adding that the BTC administration was working to the conservation of forest as well wildlife.
NGO organiser Mahes Chandra Barman said that the plantation drive was a programme to gain natural conservation as today peoples are not thinking about forest reforesation. ‘I do welcome the forest conservation process along the hills areas in BTAD initiated by tourism department’,Barman said.

5 Jan 2012 - 1:06pm | editor
The Assam government will sit in talks with KMSS, TMPK, AJYCP and AASU in Dispur on Thursday to fine out an amicable solution to the mega dam deadlock that has resulted in a paralyzing deadlock in... 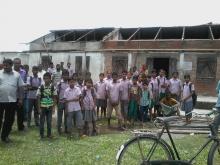 13 Jul 2010 - 2:54am | DigantaTalukdar
To protest against the price hike and NC Hills scam, the Nagaon district youth committee of All India United Democratic Front (AIUDF) marched a rally with placards in Nagaon on Monday. The members of...