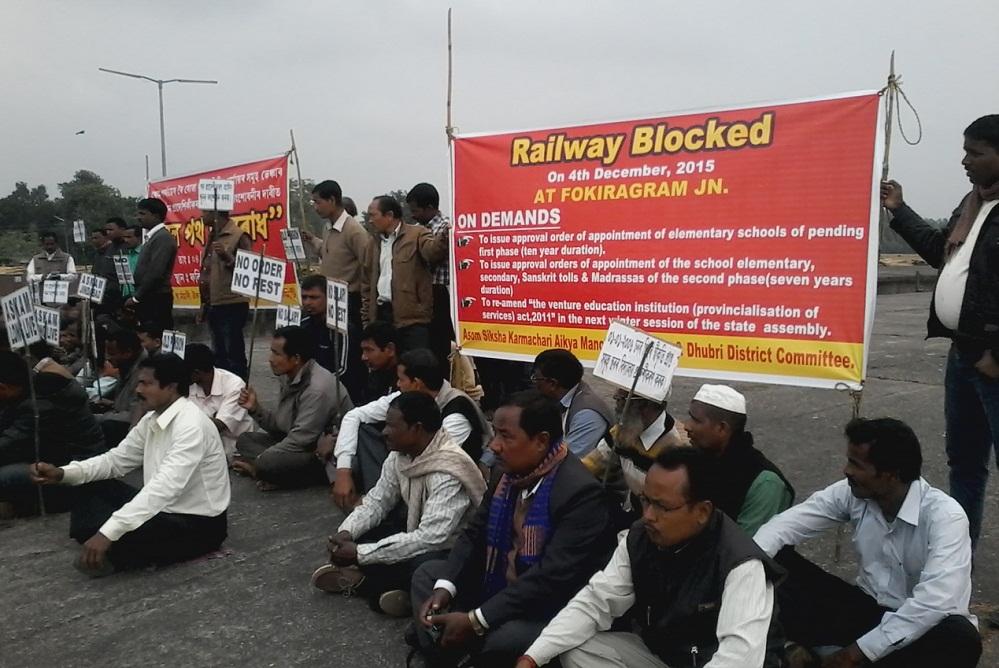 Train services along the Fakiragram Junction of Kokrajhar district were disrupted for two-hours through the Northeatern Frontier Railway(NFR) following railway blockaded by teachers under the banner of Asom Sikshak Karmacharai Aikya Mancha(ASKAM) at Fakiragram railway station today demanding early solutions of their various grievances including issuing of approval orders of appointment of elementary schools of pending phase in the state.

Hundreds of teachers from various districts of the Lower Assam region,which has been comprising Kokrajhar,Chirang,Baksa,Dhubri,Bongaigaon thronged the rail track with banner,festoone and placards shouted slogans demnading early approval orders of appointment of elementary schools of pending phase in the state.The teachers demnaded also issuing of approval orders of appoinment of the schools of elementary,secondary,Sanskrit tolls & Madrassas of the second phase(seven years duration),re-amendment “The Venture Educational Insitutions(Provincialisation of Services) Act,2011” in the next winter session of the state assembly,rectification of the general issues related to venture schools in the state.The agitated teachers started their blockade from 9 am which continued for two hours till 11 am and later lifted after district adminstration assured for sending message to the govt on their demands.The teachers also warned for strong agitation if their demnads are not solved in earliest manner.

Tej Narayan Shaw,a agitated teacher said, “The govt has not been taking any step to solve their demands. The teachers community have force to blockade railway due to negligence response from govt itself as they are deprived from appointing in the schools.The govt should be responsible whatever incidents occurred in the agitated situation in near future”.

6 Mar 2014 - 12:22pm | SK Hasan
General elections are round the corner. The authorities are also gearing up to ensure free and polls.The photo identity card of voters are mandatory from this time.Voters in large numbers have been...

2 Jun 2015 - 10:44pm | Hantigiri Narzary
The All Bodo Students Union(ABSU) expressed displeasure over the non printed of NRC application form in Bodo language, as the Bodo language being under the recognition of the 8th Schedule of the...