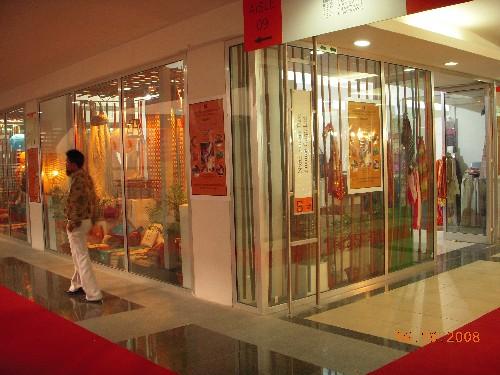 NEDFi has put up a show to showcase the unique and beautiful designer products of North East in the Indian Exposition Mart at Greater Noida in the Autumn version of Indian Handicrafts & Gifts Fair’ 08 which was started on 15th Oct and will continue till 18th Oct. The fair draws thousands of buyers from all over the world during this 4 day extravaganza. Many buyers have visited the North East pavilion aptly named ‘COLOURS OF NATURE’. Enquiries on bamboo products, cane products and the handloom weaves of the North East are being made and actions appear positive. Maximum buyers have been from Europe and Japan. The Muga silk of Assam has its own uniqueness and the visitors have shown keen interest. NEDFi is optimistic that the response would be positive.

The North Eastern Development Finance Corporation Ltd. (NEDFi), was created to foster economic development of the North Eastern region by identifying, financing and nurturing eco-friendly and commercially viable industrial, infrastructure and agri-horticultural projects in the region. It has endeavored to promote a sense of professionalism in the region, involving itself not just in financing of projects, but also in empowering the entrepreneurs with the tools that go into the running of a successful business. What NEDFi delivers, therefore, is a complete package deal, which means the Corporation is one with the entrepreneurs from concept to commissioning. As a part of developmental activities NEDFi provides skill upgradation and capacity building of the rural artisans and entrepreneurs of the NER in most of the economic activities in general and handloom & handicraft in particular.

This is the seventh continuous year that this North east pavilion is being put up. This initiative was started as part of a project started in order to promote the exports of Handloom and Handicraft items from NER, NEDFi is taking the initiative with the Aggressive International Marketing Project for NER with technical help from EPCH. The project has come to a successful phase with a lot of entrepreneurs from the region entering the international arena of exports and giving a boost to the economy of the region. NEDFi has also supported and promoted potential entrepreneurs in visiting foreign International Fairs like Birmingham Fair, UK, Bangkok, Furniture Fair in Germany, Gifts Fair in Italy etc. All round development of the North Eastern Region of India is the sole mission of NEDFi. All together 18 exporters have joined the NEDFi pavilion this year from all over North Eastern states.

23 May 2013 - 7:52pm | Ritupallab Saikia
As a part of the ongoing diamond jubilee celebration the Golaghat District Sports Association (GDSA) is going to organize an all assam open sports quiz on July 7. A maximum of two numbers of two...

5 Mar 2011 - 10:52pm | editor
The main opposition AGP is in a mood to strike prepoll deal with ASDC and B PPF to fare well in the assembly polls slated on April 4 and 11 AGP will leave a few seats for A SDC in Karbi Anglong...