Namrup: Rebel elements still keep unleashing terror in many parts in the form of extortion apart from recruitment drive even in the festive season.

Army and police apprehended an ULFA(I) rebel during a joint operation in Sivasagar district on Saturday who was said to have been carrying extortion and recruitment on behalf of the rebel outfit.

Acting on a tip off army jawans from Maibela and Joysagar along with police launched a joint crackdown in Bokota near Nemuguri where, the rebel identified as Navadeep Chetia was arrested.

Then Nemuguri police took him into their custody after a pistol, two rounds of bullets were seized from his possession.

Modi to visit state on April 17

9 Apr 2014 - 2:44pm | AT News
BJP’s prime ministerial candidate Narendra Modi will again visit Assam to campaign for the party candidates for the Lok Sabha polls.The Gujarat Chief Minister is scheduled to visit the state on April... 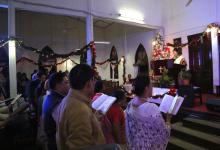