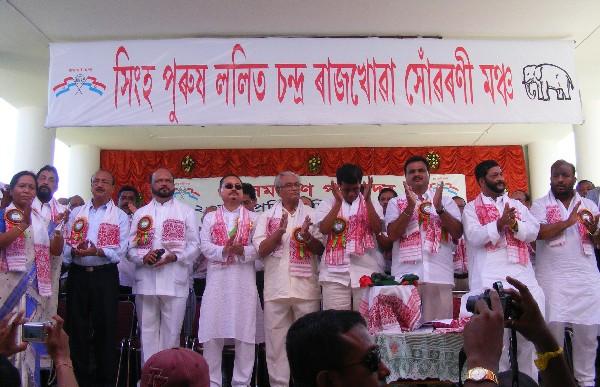 Regional Politics of Assam got glorifications when all the factions of the Asom Gana Parishad (AGP)-the political platform born out of in famous Assam Movement in late seventies and mid eighties by the apex students organization of the state All Assam Students' Union (AASU) unified on 14th Oct 2008 at Bhrigu Kumar Phukan khsetra at Golaghat the birth place of the party. It may be recalled that two decades back setting all speculations aside AGP became the voice of the people. Blame any one in of top brass of the party who were promoted from students leader to political leaders to work in accordance to the call of the people of Assam but the party failed to continue and win faith. Partial implementation of Assam Accord was also a major set back of the party. The most important clause of the accord to free Assam from illegal migrants became a headache for the then AGP government. Establishment of national institutes like IIT, bridges, refineries like NRL and other developmental projects in the state could the save image of the party. Some forgetful incidence like secret killing during chief minister Praffulla Kumar Mahanta regime maligned the image of the party thereby giving a new abbreviation to the party Assam Gondogol Party and in later stage Andolan Gondogol Party amongst the mass. Differences of opinion of the leaders lead to factions of the party later when Mahanta was dropped from party president charging him responsible of the division in the party the two times CM also formed a new party AGP (Progressive in Assamese Pragatisheel) AGP (P).

Protests of AASU on induction of Mahanta in unification marred the visible pleasure of the party workers. Effigies of former CM Mahanta the founder President was brunt in day light barely 200mtrs away from the venue of the unification terming him as traitor meanwhile leader of the Opposition of the Assam Legislative Assembly and President of newly unified AGP Chandra Mohan Patwary was advocating historic Golaghat Declaration punch line Change. Golaghat Declaration as declared at the Singha Purush Lalit Chandra Rajkhowa manch is a substance of the historic Assam Accord with a promise to work together for Change. C. M. Patwary is following the call of the western politics as advocated by Democratic Presidential candidate of United States Presidential election Barack Obama. If Patwary is able to receive even 50% of what Obama achieved calling Change will definitely liven the spirit of the party and critics at that time would thank Obama for his invaluable thought. All is not well in AGP as the think tank could not convince their ousted former President Brindabon Goswami who recently in a interview to a national newspaper said that the party cannot perform with out obliging AASU its base organization. He also said he has not been given reasons for his ouster in written and AGP did not communicate him further after the general council meeting. Most important part of his statement is that he is yet to decide his fate in politics with the party though the AGP has retain him as executive member. Media shy working president of AGP Phani Bhusan Choudhury who served same portfolio under Goswami is the man to be credited for this historic unification and further glorification of the party. AASU have reasons to smear black ink on P K Mahanta effigies during unification but role of AASU though can be logical but is not justified. AASU has many other issues to highlight and democratically stand for the people, nobody will deny that role of AASU being handful in deciding fate of regional politics of Assam. AASU should try to retain its image as the Voice of the People. AGP now has accepted its blunders of the past and vowed for rectification. We need to just wait and watch.

Dramatically speaking a multi crore Bollywood movies can shot on political development of Assam. Someone like Madhur Bhandarkar or Mahesh Bhatt if someday they find and study Assamese politics definitely a movie will be in theatres soon. Amidst huge speculation the AGP unification is formally over by waving hand in hand together in Golaghat. Will this hand in hand show bring together their political thoughts as nobody knows on what grounds they are unified. Distribution of tickets during next Assembly election will be a acid test for Patwary and co. and for spectators it would be interesting to note the Change at that time as called the supreme of AGP. Role of the party is also notable in the General Election scheduled early next year. The fate of politics of Assam lies with the general people as the supreme right to decide fate of Assam lies in within them.

Permalink Submitted by Pallavi Barua on Mon, 20/10/2008 - 01:16
"....unified at Bhrigu Kumar Phukan kshetra"----late Bhrigu Phukan; this is the same man whose political career was ruined by Prafulla Kumar Mahanta. A construction over his grave---AGP---whom Assam and the Assamese should never even think of relying their faith upon.

8 Jun 2015 - 9:06pm | AT News
The overall flood situation took a grim turn claiming yet another person on Monday. The Brahmaputra is flowing above the danger mark at Nematighat in Jorhat and Jia Bharali at NT Road in...