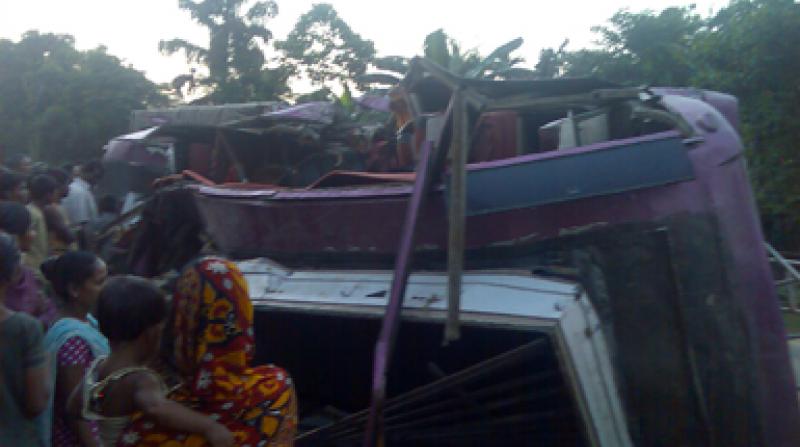 At least 26 people, mostly labourers engaged in brick kiln, were killed, 45 others have been injured, some of them seriously when a bus collided its head on a stranded truck at Beltoli Chariali under Golokganj police station in Dhubri district on Monday midnight.

According to information, accident took place when a bus Usha bearing No AS17/7152 bound for Singimari in Hajo collided its head on a stranded tuck No AS21/5027 on the National Highway 31. Fifteen people including 6 children died on the spot while eight others succumbed to injuries on the way to hospital.
Immediately after the incident local residents and police came to the rescue of the injured people and rushed them to the nearest hospital.

All the 16 people died on the spot while the others died on the way to hospital. Twenty three of these deceased have been identified. More than ten people now undergoing treatment are stated to be in critical condition. Details are awaited.

5 Jul 2014 - 9:17pm | AT News
Chief Minister Tarun Gogoi and APCC president Bhubneswar Kalita are understood to have been preparing to urge Sonia Gandhi to resolve the dissidence within the Congress legislature party.Both Gogoi...

23 Jan 2015 - 5:43pm | Hantigiri Narzary
Altogether 1,441 teachers from four districts of BTAD were given away appointment letters for regular posts in Lower Primary and Upper Primary Schools at a function held at Bodofa Cultutal Complex at...