Gogoi visits Darrang, Udalguri to pave the way for normalcy 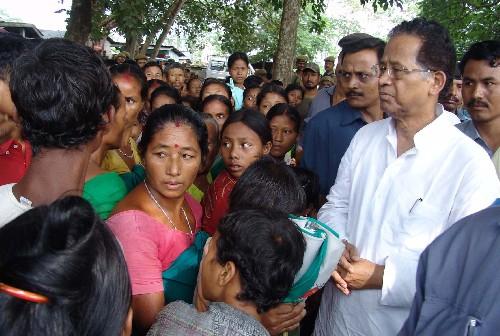 Assam Chief Minister Tarun Gogoi on Friday visited the violence-hit areas of Udalguri and Darrang districts in where at least 62 people were killed, hundreds of houses torched and over one lakh people have been rendered homeless.

The Chief Minister visited the Bhakatpara and Bechimari camps, where more than 10,000 people have taken shelter. Normalcy returns to these areas and curfew had been withdrawn from most parts of the affected districts.

However, both indigenous people and immigrant settlers were still maintaining night vigil as the villagers were trying to rebuild their lives as more than 120 houses had been torched with majority of the victims were indigenous people.

23 Apr 2011 - 8:04pm | Juthika Das
Dr. Manjit Das, professor of Economics, M.C. College Barpeta has been awarded the SCHOLL Research Challenge Award for the year 2010. This award was given by North-East Development...

29 Aug 2007 - 3:59am | pragmoni
Guwahati : One ULFA was killed at Borka Borigog village in the wee hours of Wednesday in an encounter with police.One policeman was also injured when the militants exploded a bullet.Borka is the...

16 Jun 2013 - 9:25am | Paresh Baishya
Paresh Baishya Foundation, a trust for enrichment of education and journalism, has invited nomination papers for Best School Award, 2013.The school having 100% success rate in the H.S.L.C or CBSE...