10 Jun 2014 - 5:49pm | Raktim Baruah
Gauhati University, the oldest higher educational institution in the NE region, has been awarded the European Awards for Best Practices 2014 by the European Society for Quality Research (ESQR) on 1st... 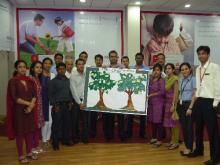 11 Jun 2011 - 3:25am | Amarjyoti Borah
The HSBC Guwahati branch in association with the Delhi based environment organization Centre for Media Studies (CMS), is celebrating World Environment Week 2011, with various activities aimed at...

Faced with bandh calls, musicians in Assam get together for Freedom Jam

16 Aug 2010 - 11:36pm | editor
A day that is of immense significance in the lives of every Indian. The entire country wakes up on this particular day to celebrate their state’s independence. The day is a national holiday...