GUWAHATI: After a brief silence poaching strikes again in Kaziranga where a full grown rhino was killed on Sunday. The forest guards deployed in Bagori range discovered the carcass hours after the poachers killed it for the horn. But they were believed to have left the spot without chopping off the horn because of the presence of the guards.

11 Feb 2012 - 2:54pm | editor
A minor girl, hailing from Assam is believed to have committed suicide by hanging herself at her residence in Mumbai. The tragic incident took place in Madanpura area of Nagpadaon Friday. She was... 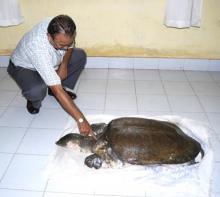 2 Aug 2008 - 2:41am | Nanda Kirati Dewan
In a land of flora and fauna and where even animals both wild and aquatic are worshiped, this news would come as surprise to you. Turtles at the Hargrib Madhav Temple, Hajo at the outskirts of...