GUWAHATI: After a brief silence poaching strikes again in Kaziranga where a full grown rhino was killed on Sunday. The forest guards deployed in Bagori range discovered the carcass hours after the poachers killed it for the horn. But they were believed to have left the spot without chopping off the horn because of the presence of the guards. 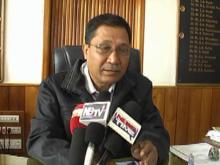 30 Apr 2015 - 5:52pm | AT News
Yet another body of pilgrim from Assam has been identified in Nepal. Identified as Padma Mazumdar, the resident of Hengrabari area of Guwahati has been traceless since the massive tremor ravaged...